P.S I Love You is getting a sequel, and frankly our hearts are not ready

Are we still a little shaken from the last time we watched P.S I Love You?

Yes, absolutely, it pulls the heartstrings like no other.

Plus, it happens to be one of our fave romantic movies of all time.

And if you are also a fan, then we have some super exciting news!

We're getting a SEQUEL!

Variety has reported that Alcon Entertainment recently secured the rights to author Cecelia Ahern’s sequel to the book P.S. I Love You, titled Postscript.

Do we have many details? No not at all, but know that it's coming, and that's enough for us.

However, having read the book, I can tell you that Postscript picks up seven years after P.S I Love You.

Holly agrees to tell her story on her sister’s podcast, and a lot happens from that. 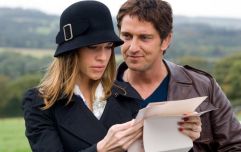 The PS, I Love You sequel is officially being made into a movie, confirms Cecelia Ahern

END_OF_DOCUMENT_TOKEN_TO_BE_REPLACED

Now the big question... will Hilary Swank return to our screens as Holly?

No real word on that yet, but we know she really loved starring in the first film.

At the time, she spoke about why she decided to play Holly.

"For me, after reading the script I was reminded of what life is about. It was a reminder that you just want to hold those ones that you love dear because you don’t know what’s going to happen tomorrow."

"It’s such a great love story and I think that we can all relate to that—finding love and losing love…. If it’s not through death, even a breakup can sometimes feel like a death. There were many things that I could relate to and a lot of laughter in between."

Petition to get Hilary and Gerard Butler back for a sequel, anyone?


popular
Ronan and Storm Keating have welcomed their second baby – and her name is the cutest
9 new Netflix additions we can't wait to check out in April
Real life Corrie couple Sally Carman and Joe Duttine have gotten engaged
5 new additions to Netflix to spend your weekend watching
So, William and Harry have a step sister... and who knew?
Love Island's Curtis responds to rumours he has moved on after split from Maura
Tesco Ireland to introduce priority shopping hours for healthcare workers
You may also like
4 days ago
Chris Evans is a man on a mission in the trailer for the gripping new drama Defending Jacob
4 days ago
8 upcoming Netflix documentaries that you won't want to miss
4 days ago
Jorgie Porter is 'returning to Hollyoaks' to celebrate the soap's 25th anniversary
4 days ago
Mark Feehily challenges Westlife fans to learn one of the band's dance routines
4 days ago
Season six of Schitt's Creek will be coming to Netflix in May
4 days ago
Love is Blind has been renewed for two more seasons
Next Page