QUIZ: Are you able to name these Disney movies based off of the castle?

It's more difficult than it seems.

Whether it's a sprawling spooktacular estate or a jaw-dropping hilltop palace, most of Disney's animated classics involve some kind of castle.

There's even a few majestic palaces buried deep in the woods - and underwater.

No matter the locations, there's one thing that's a guarantee: these castles are going to be absolutely stunning.

Even when they may end up looking a bit run down.

(Seriously, have you seen Elsa's castle?!)

Disney fans are, at this point, pretty likely to be familiar with the members of the royal courts - as well as their subjects.

But how well can you remember the spots that the kings, queens and Disney princesses call home?

Do you know Princess Aurora's castle from Elsa and Anna's home of Arendelle? What about the differences between the underwater kingdoms of Ariel and Kida Nedakh's Atlantis? 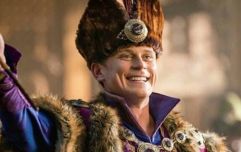 END_OF_DOCUMENT_TOKEN_TO_BE_REPLACED

What about what the kingdom of Dunbroch, from Brave looks like?

No matter how many times you may have seen these classics, it's bound to be a challenge for even the most die-hard of Disney fans.

So, it's time to put your Disney knowledge to the test and see if you can match these 13 castles to their films.


popular
Tried and tested: I got my eyebrows laminated, and I'm absolutely weak for myself now
We are absolutely obsessed with this grey teddy coat, and it's just €29 in the Zara sale
The 1975's Matt Healy and girlfriend Gabriella Brooks break up after four years
Brad Pitt JUST responded to speculation about his relationship with Jennifer Aniston
So, William and Harry have a step sister... and who knew?
Samantha Markle has spoken out about Meghan and Harry's decision to pull away from the royals
There's a new period drama from the creator of Downton Abbey on the way
You may also like
1 week ago
You absolutely need this Disney dinner set for the house you probably can't afford to buy
1 week ago
There's a Disney-inspired boozy brunch coming to Dublin in June and we are SO there
1 week ago
Gucci have released the collection of our Disney-loving dreams
2 weeks ago
Gucci has just launched a collection with Disney, and yes it's very expensive
2 weeks ago
Disney receiving criticism for proposing a special security door for their Grafton Street store
1 month ago
10 Disney tattoos which are just absolutely magical
Next Page