Hardly the most surprising turn of events for Madeline.

It's worth it, trust us.

If you are a fan of the show though, you'll be more than well aware that the series's second season is due to drop onto our screens some time next year.

Not a whole lot of information has been released about the plot, but this week, we were treated to a bit of an inside scoop (oi oi) as to what's about to go down.

I am praying Reese pelts Meryl with that ice cream. #BigLittleLies pic.twitter.com/zA91wN9CyP

In the upcoming series of the show, Meryl is set to play Celeste's mother-in-law following the death of her husband. 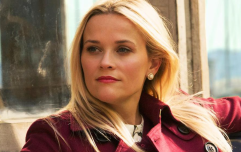 END_OF_DOCUMENT_TOKEN_TO_BE_REPLACED

Celeste, played by Nicole Kidman, was being emotionally and physically abused by her husband up until his eventual death at the end of season one.

It makes sense then that Reese's character, Madeline, isn't all that happy that remnants of her friend's abuser (his mother) are showing up in her town.

So she throws an ice cream at her. We can only assume this is what happens.

Reese even took to Twitter herself to confirm that she did indeed hit Meryl with the cone. Responding to another tweet, she said: "Oh Matt. No need to pray. I got her."

A true cultural icon of our time.