We now have to admit it now, we have been entirely spoiled by the brilliance of the Hunger Games. Although the cast and crew from Divergent have been doing their best to distance themselves from any sort of comparison to the Hunger Games films, it really is difficult to separate the two; both centre around a strong female character, almost an outcast from her home who must step up to protect her family and her community, both come from dystopian communities with leaders who want to implement their new regimes. It's really difficult to get away from the Hunger Games with a plot like that.

However, where we could do nothing but build with films like Twilight, there really doesn't need to be that much improvement on the Hunger Games. In fact, if you are aiming to produce a film for the young adult genre, you better make it original and a damn sight better than anything in the cinemas, which is obviously impossible; the Hunger Games films are now in a league of their own. With a superstar like Jennifer Lawrence, great cast and a great story, anything competing in this area is going to pale in comparison. Unfortunately, that's where Divergent attempt to steps in.

Not to say the plot of Divergent is not fine in its own right. Revolving around the central figure of Tris, the film follows the period in her life just before the test, a test which will essentially tell her what kind of person she is and which group she should be a member of. In Divergent, society functions which each person assigned to their proper roles in life, Abnegation, for the selfless; Amity, for the peaceful; Candor, for the honest; Dauntless, for the brave; and Erudite, for the Intelligent. Although Tris has been brought up as Abnegation, she can choose whatever life she would like to lead, but this may mean never seeing her family again if she chooses outside of her own group. 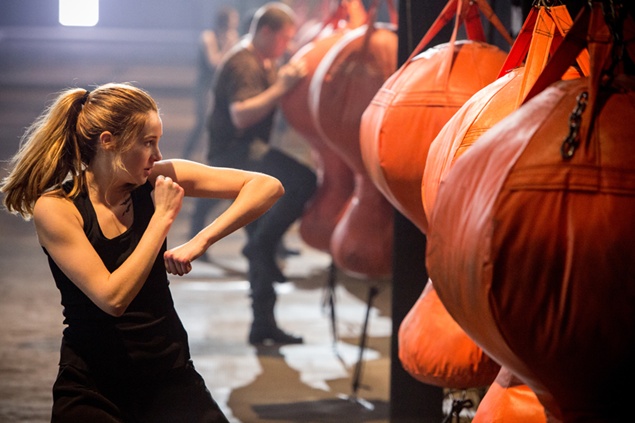 END_OF_DOCUMENT_TOKEN_TO_BE_REPLACED

However, when Tris takes the test, she is ushered quickly out the back door when the results are revealed; she is Divergent, a category the most feared by her rulers. When choosing her new group, Tris picks Dauntless and begins to train in order to defend the city from its enemies until she learns some terrible truths. Far from the Erudite group not being interested in other sectors, she discovers they plan to take over and remove those in their way, namely Tris' original group, Abnegation. Of course, Tris along with her tutor Four, tries to put things right but can she prevent the evil Jeanine from finding the truth out about her.

Divergent's main problem is that is not the Hunger Games. However, if you do just forget about the fact that the Hunger Games exists (we've tried, it's not really possible) this is actually a reasonably fine film. It's first problem is its length. With Divergent aiming to become a series, the first film always has the most difficulty in setting up the story, which will of course contribute to its length. On the other hand, Divergent could have ended on at least three other occasions before the credits rolled, which just makes things a little boring.

The central love story between Tris and Four is perfectly acceptable as this always takes second place to her training and her ability to consider things from many view points before she makes decisions. Tris is a strong female character and Shailene Woodley, she of the Descendants fame, plays the role quite well. Theo James, who almost looks a little too much like James Franco, is a pretty good love interest but Kate Winslet steals the show as the evil Jeanine who just wants to keep everything just right, with Erudite in charge.

Unfortunately, there isn't really too much here to keep you engaged and in areas where you should feel exhilarated, Divergent never really delivers. In terms of introducing Shailene to us as an action star and a set-up, we're willing to see more, but hopefully not that much more.

popular
Friends actor James Michael Tyler has died, aged 59
Late Late Show viewers are not happy with Ryan's questions for Billy Connolly
10 items from Zara for the perfect autumn capsule wardrobe
Friends Star James Michael Tyler Files For Divorce
9 of the best horror movies on Netflix this Halloween
WATCH: Parents see person walk past daughter's crib in creepy baby monitor footage
Say hello to fairy hair, the dreamy new trend popping up all over social media
You may also like
1 month ago
10 autumn-themed movies that are practically essential viewing this season
1 month ago
One of the best comedies of the last 20 years is coming to Netflix
1 month ago
"It is really amazing:" The Little Mermaid star gives update on live-action remake
2 months ago
Netflix reveals release dates for all of the huge movies still to come in 2021
2 months ago
The full list of all the new shows and movies coming to Netflix in August
3 months ago
QUIZ: Can you guess the movie from its pixelated poster?
Next Page