Yep, we should definitely count our blessings.

Monday mornings are just the worst aren't they? Your precious weekend seems to be fly by, as the joy of Friday turns into the dread of a Monday in the blink of an eye. It's cold, it's dark, it's miserable - and you've got a whole working week ahead of you.

It's why we and others always try to cheer you up with some Monday morning motivation - or at very least a momentary chuckle to brighten your spirits. After all, it's not so bad. Of course you can't be arsed with a early rise but it could be so much worse. 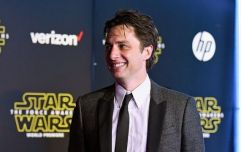 Zach Braff to star in Cheaper By The Dozen remake

END_OF_DOCUMENT_TOKEN_TO_BE_REPLACED

Zach Braff, the much-loved and very witty star of Scrubs, Garden State and Chicken Little, certainly agrees. Although his cheery message of a Monday morn was slightly more 'out there' than a mere picture of a sunrise, or a cheeky little minion or two.

The 41-year-old was keen to share a story he had just happened across by way of a count-your-blessings sentiment. Some of you may be aware of it from a few years ago - if you're not then you're in for treat. It refers to a dead Gordon Ramsey 'sex dwarf'.

Food for thought, for sure.

Unfortunately/fortunately, the headline may have been real, but it was from the Sunday Sport, who are famous for their tongue-in-cheek faux splashes. For example... It didn't stop Braff's 1.5 million followers reacting to the imagined death of the randy vertically-challenged chef lookalike with shock and dismay...

Too much information in one title

I envy and feel for the person that has to write his eulogy.

It must be stressed that no dwarves, chefs, badgers or medical students were harmed in this article.

popular
Bride asks for divorce day after wedding following groom's disrespectful cake stunt
Molly Mae shuts down backlash over her baby girl's name
Little girl spends 17 hours protecting her baby brother's head under earthquake rubble
Expert team end search for Nicola Bulley declaring she’s not in the water
Emma Pattison made distressed call to her sister before murder-suicide
Brother and sister abducted in March 2022 have been found alive
Natalie Imbruglia's Torn is actually a cover and the original just isn't the same
You may also like
3 weeks ago
"People didn't like it": Florence Pugh addresses relationship with Zach Braff
2 years ago
Florence Pugh responds to people's 'abuse' over her relationship with Zach Braff
7 years ago
PICTURE: There Was A Pretty Epic ‘Scrubs’ Reunion This Week
7 years ago
"I'm No Superman" Eleven Things We Learned From Scrubs
8 years ago
PICTURE: It's "Guy Love" as Scrubs Cast Reunite
8 years ago
You Still Have A Chance With Zach Braff – Actor Doesn’t Want To Date Another Famous Girl After Mandy Moore
Next Page