One of the main cast members on our favourite property show is packing it in.

Selling Sunset's Davina Potratz has told People magazine that she's leaving her job at the Oppenheim Group but have no fear... she's not done with real estate just yet.

END_OF_DOCUMENT_TOKEN_TO_BE_REPLACED

As many people do, she's moving on to other opportunities, but she's not going far! Davina has landed a job with a rival real estate brokerage, Douglas Elliman, which is an esteemed company based in Beverly Hills.

Speaking about the move, Potratz said she is thrilled with the opportunity:

“I’m really excited to be a part of Douglas Elliman and their very sophisticated and global new development division. My background is in new development sales and marketing, so this is just a wonderful opportunity for me,”

One of my favorite things about a house can be tropical plants and landscaping. I think I might even take a lush yard over a view. Would you? #compoundlife ??

So, does this mean she's off the show? Although the whole point of Selling Sunset is to focus on the lives of people working at the Oppenheim Group it seems Davina has no intention of saying goodbye to the Netflix hit just yet:

“I certainly hope that I’m still part of the cast,” she says. “Brett is not at the Oppenheim Group anymore either, so I don’t think that that’s going to be an issue at all.” 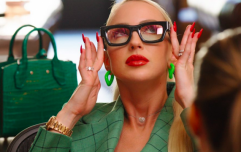 END_OF_DOCUMENT_TOKEN_TO_BE_REPLACED

We've no doubt this twist in the tale will bring added drama to the next season of the show, we actually love the idea of rival brokerages battling it out for luxury property listings (we're too invested, we know) and although Davina says it was purely a "business decision”, we still can't wait to hear what Queen Christine thinks.