In good news for fans of The Umbrella Academy, there's a prequel starring Klaus on the way.

Yes, while we continue to wait for season two of the Netflix hit, there's a brand new spinoff comic series on the way: You Look Like Death.

The six-part story will be written by My Chemical Romance's Gerard Way, the co-creator of the original series and the executive producer of the TV show, and Shaun Simon.

The New York Times report that it's Simon's first time working on The Umbrella Academy, but he's worked with Way in the past.

Part one of You Look Like Death will be published by Dark Horse Comics in June. 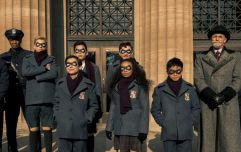 Netflix have officially renewed The Umbrella Academy for a second season

END_OF_DOCUMENT_TOKEN_TO_BE_REPLACED

‪Featuring the one and only Klaus, aka The Séance, the story picks up roughly 10 years before the events of Apocalypse Suite - the first instalment in the series - when Séance gets kicked out of The Umbrella Academy.

"With his allowance discontinued by Hargreeves, he takes to a place where his ghoulish talents will be appreciated––Hollywood. After a magical high on a vampire-drug-lord’s stash, Klaus needs help, and doesn’t have his siblings there to save him," the description for the comic series continues.

"For a long time, I had wanted to tell the story of Klaus Hargreeves’ life after the Umbrella Academy disbanded and before the events of Apocalypse Suite," Gerard Way said.

"I imagined a pretty wild decade for Klaus-- full of ups and downs, seedy places, supernatural excursions, and internal battles within himself. I am thrilled to finally be able to tell this story with my co-writer Shaun Simon, who sees the world of the UA as clearly as I do. Also thrilled to work with such an amazing art and lettering team in I.N.J. Culbard and Nate Piekos."


popular
Zara's €20 top comes in eleven different colours and it's the cosy comfort we need
Golden retriever Sunny delivers groceries to his owner's neighbour and what a good boy
Drake has shared the first photos of his two-year-old son Adonis on Instagram
Love Island's Maura Higgins opens up about the reason behind her split from Curtis Pritchard
'You've been great' It looks like Harry and Meghan just shared their final Instagram post
#Covid-19: Life cannot go 'back to normal' after Easter Sunday, says Simon Harris
Meghan and Harry issue statement following Donald Trump's Twitter comments
You may also like
4 days ago
AJ Pritchard has quit Strictly Come Dancing after four years
4 days ago
Martin Compston says Line of Duty will be 'better than ever' when it returns for season six
4 days ago
Season six of Brooklyn Nine-Nine lands on Netflix this weekend
5 days ago
Home Before Dark is the mystery series everyone's going to be talking about this year
5 days ago
Kym Marsh has landed a major new role after leaving Coronation Street
5 days ago
David Harbour 'reveals' the release date for season four of Stranger Things
Next Page