The viral BBC kids are getting their OWN TV show

It was a moment of pure TV (and internet) gold when four-year-old Marion Kelly (followed by her baby bro and frantic mother) burst through the doors and essentially gatecrashed her father's live BBC interview.

Political science professor Robert Kelly and his inputs on what is going on in Korea hadn't a hope – just one look at Marion and her "bippeti boppeti" walk and, collectively, we all fell hook, line and sinker.

And then, a few days later, at a family press conference to discuss the tot's newfound viral fame, little Marion's no-f**ks-given attitude made her an out and out internet star.

Between her steely stare, pink-rimmed glasses and the ever-present lollipop dangling from her mouth, one thing became clear: It is Marion's world – the rest of us are merely living in it.

If she isn't President of Earth by the time I'm 80, I'll be bitterly disappointed. pic.twitter.com/f5qEfaaPT7

And now the adorable Kelly kids are getting their very own TV show (well, kind of) and we could not be more excited.

According to the Huffington Post, earlier this week Hans House Productions released the first episode of "The Adventures of Mina and Jack"― an animated YouTube series based on our all-time favourite viral kids, Marion and James.

The show apparently follows Mina and Jack ― “a mischievous duo who can’t help but get into trouble ... and on the news.” 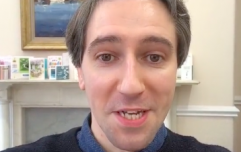 Simon Harris signs up for "TicTok" and gains 38k followers

END_OF_DOCUMENT_TOKEN_TO_BE_REPLACED

In the show's first episode, little Mina and Jack join their dad, who works for the U.N. (or “the un” as Mina calls it), on a trip to North Africa to catch a gold thief.

And naturally, professor Kelly is already a fan of the show inspired by his kids.

“I thought it was so cute,” Kelly stated in a press release. “My wife and I both laughed. They made me look suitably dorky."

Girls With Goals || Her · Ep.161: Feeling Peachy - Sharon Keegan of Peachylean on being an absolute BOSS!
popular
Harry Styles accepts BRIT for Best British Single - with American accent
Woman buys 148 year old house, goes viral after finding secret passage way
Is that Seth Rogen without a beard?
Nine-year-old boy dies after being struck by lightning in UK
9 Dublin restaurants with outdoor dining we've already booked a table for
Lewis Capaldi muted by BRITs during chaotic, swear-y speech
Penneys issues statement after shoppers try to sell appointments for €100
You may also like
1 week ago
We got our hands on the viral Lidl hanging chair and life is good again
2 weeks ago
Cookie butter lattes are trending on TikTok and here is how you make one at home
1 month ago
M&S reveals limited edition Easter-themed Colin the Caterpillar
2 months ago
Couple photographed meeting at Woodstock still together 50 years later
2 months ago
Dublin nuns share Jerusalema dance challenge "to cheer people up"
2 months ago
€25 leggings that Lizzo swears by go viral after receiving 24,000 5-Star reviews
Next Page