WATCH: Taylor Swift's music video for Christmas Tree Farm is here - and it is TOO cute

The video for Taylor Swift's Christmas Tree Farm is here - and it is just adorable.

The singer sent fans into a frenzy on Thursday when she revealed that she would be releasing a Christmas song today [December 6].

But it wasn't just a new Christmas song that she released - no, there's a music video, too, and it is entirely made up of home movies.

The 29-year-old grew up on Pine Farm in Reading, Pennsylvania, with the just-under-four-minutes-long clip showing some sweet moments from family videos on the property.

Her parents, Andrea and Scott, and her brother Austin also make appearances in the music video, which shows them playing in the show, enjoying the twinkling lights of the Christmas tree, and an overjoyed Taylor unwrapping an acoustic guitar.

You can watch the music video for Taylor Swift's Christmas song, Christmas Tree Farm, below. 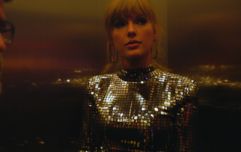 WATCH: Turn on your party shoes, the trailer for Taylor Swift's Miss Americana is here

END_OF_DOCUMENT_TOKEN_TO_BE_REPLACED

The fabulously festive song rounds out a very busy 2019 for Swift.

Her seventh album, Lover, was released earlier this year - and she earned three Grammy nominations. She also was honoured as Artist of the Decade at the American Music Awards.

Last month, she announced that she has a Netflix documentary on the way amid her music battle with Scooter Braun - and she will be headed for the big screen later this month as Cats hits cinemas.

popular
Selling Sunset's Chrishell Stause reveals "the brokerage has split"
Kate Middleton has addressed the rumours that she's pregnant with her fourth child
From blonde to brunette - 6 things I wish I knew before going back to my roots
Eight Of The Best Films And Documentaries On 9/11
Oy with the poodles already! Alex and Ani have released a Gilmore Girls collection
5 Netflix releases to keep an eye out for in October
15 signs that prove someone is falling in love with you
You may also like
7 months ago
There's a Taylor Swift club night happening in Dublin next month and we'll see you there, yeah?
7 months ago
'Really hard' Taylor Swift reveals mother's brain tumour diagnosis
8 months ago
Taylor Swift's Netflix documentary is dropping at the end of the month
9 months ago
Cats movie review: Far from purrfect... but not a complete cat-astrophe!
9 months ago
Taylor Swift calls out 'toxic male privilege' of music industry in empowering speech
9 months ago
Taylor Swift is releasing a Christmas song tomorrow and fans are freaking out
Next Page