An American supermarket thinks they 'invented' a new savoury snack

We love a sausage roll, we do.

Whether it's one of Greggs' finest too-hot-to-eat-but-fuck-it-I'm-starving rolls or one from the humble supermarket multipack, the sausage roll is part of our lifeblood, which is no doubt swimming with grease and pastry, but that's not the point.

We share a cultural history with our American friends, but while you will find a few fish and chip shops dotted about the place, the sausage roll has never really taken off over in the U.S. of A.

However, one canny supermarket has taken it upon themselves to bring the sausage roll to the American masses. Trader Joe's have introduced 'Puff Dogs', an all-beef hotdog "swaddled in a perfectly flaky-when-cooked puff pastry." 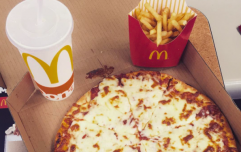 END_OF_DOCUMENT_TOKEN_TO_BE_REPLACED

"We don’t mean to hot dog here," Trader Joe's writes, "but this marriage of beefy and buttery is pretty genius."

You can't help but agree, it is pretty genius, but we've known that for centuries. Fair enough, our sausage rolls are typically made from pork, but you can't go around claiming the genius for wrapping a sausage in puff pastry and sticking it in the oven.

Of course, people had opinions about this 'discovery'.

So some US company called Trader Joes appears to be claiming they've invented the sausage roll! #NeverBeenToEngland? https://t.co/TSP01GxqYI

Looking forward to the U.S. rebrand of pork pies as 'Pig Niblets'.