Here's how to make a vegan 'fried egg', according to an Australian food blogger

If you have recently gone vegan – or have been off meat and animal products for a long time - one of the things you might miss the most is a fried egg.

Maybe it's the taste of it, maybe it's the weekend feeling of cooking one, maybe it's because they just go so darn well with avocado and toast – regardless, eggs are just one of those things many of us will struggle to replace when switching over to a plant-based diet. 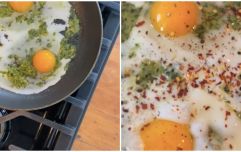 Pesto eggs are going viral on TikTok – and when you try them, you'll see why

END_OF_DOCUMENT_TOKEN_TO_BE_REPLACED

However, lucky for us, talented Australian food blogger Ellie Bullen, who regularly posts plant-based recipes on her blog Elsa's Wholesome Life, has invented a recipe for a "vegan fried egg" and has shared the instructions via her " data-vars-event-id="c23">YouTube channel - and it looked so like the real thing, that went the video first went out, it sent her followers into a bit of a frenzy.

"It tastes just like egg, it's pretty crazy," Bullen said about her invention. "If you're someone who went vegan and you really miss eggs, I think this recipe is a real gamechanger for you."

Her secret ingredients for the colour and consistency of the yolk? Pumpkin and black salt (kala namak).

Chill guys, it’s not a real egg ?? wanna see a tutorial on how to make this? Comment a ? below!! Enough pressure and I’ll finish editing the tutorial and have it up next week ? cutlery: @thewholesomestore

Fancy trying out a vegan 'egg' yourself? Here is what you need:

For the egg white

She posted the photo below of her vegan fried egg on smashed avocado sourdough toast to Instagram, and it's already been liked over 17,000 times and received hundreds of comments from thankful vegans around the world.

Girls With Goals || Her · Ep.161: Feeling Peachy - Sharon Keegan of Peachylean on being an absolute BOSS!
popular
A documentary on the murder of Grace Millane is coming soon
Emilia Clarke is set to be the next Marvel superhero
The sad reason why viral gymnast, Katelyn Ohashi, isn't on the USA Olympic team
I got laser hair removal for the first time and here’s how it went
Why Are Men so Obsessed With Boobs? The Answer is Pretty Surprising...
Jennifer Lopez just shared a steamy snap of herself and Ben Affleck – and WOW
Bride dislocates her leg during her first dance in viral clip
You may also like
12 hours ago
Rainbow tips are the cutest nail trend this summer – so bookmark these ideas for your next mani
2 days ago
Bride dislocates her leg during her first dance in viral clip
2 weeks ago
The first snapshots from the new Sex and the City reboot is here – and it looks AMAZING
2 weeks ago
Anonymous TikTok account gone private after sparking Casa Amor rumours
3 weeks ago
Meet the 'Wolf Cut' – the hottest hair trend of summer 2021 – and you'll see why
1 month ago
Bartender praised for passing note after man harassing women in bar
Next Page