Percy Pigs are probably one of the most delicious jellies out there. However, chomp away on a few and they become incredibly sweet.

Last week, M&S announced that Percy Pig sauce will be landing in stores - and the news went down like Marmite, with some loving it, and some feeling ill by it.

Percy is getting saucy! Yep, that’s right, all the flavours of Percy Pig in a pink (of course) squirty sauce. It is delicious on pretty much anything - we recommend trying with ice cream or even drizzled over pancakes ?? ? • • • #Percypig #dessert #pink #saucy #mymarksfave #thisisnotjust #vegetarian 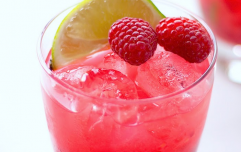 END_OF_DOCUMENT_TOKEN_TO_BE_REPLACED

Whatever your opinion, we have become intrigued by this Percy Pig cocktail that has been created by a bar in Glasgow.

Using the new syrup, Driftwood Bar has introduced the cocktail made up from gin, strawberry vodka, cranberry sauce and a dash of lemonade. The sweetest thing though? It's topped off with candyfloss.

The bar's general manager, Nicola Walker, told Tyla that when the sauce launched in the New Year, they knew they had to do something with it.

"We decided to use the dessert sauce to make an alcoholic celebration of the sweets! Plus it comes with a your very own Percy Pig sweet," she said.

"It's been proving extremely popular since we launched it. In fact, I had to buy my local Marks and Spencer's out of dessert sauce and sweets the other day - pretty sure the check out lady thought I had lost it."

Driftwood Bar is known for it's unique cocktails and has previously created ones inspired by Harry Potter and Disney.

However, you don't have to travel to Glasgow to try the scrumptious drink as they have provided the recipe for everyone to try at home:

Simply shake the alcohol, cranberry sauce and dessert sauce together with ice. Pour into a glass and finish with the dash of lemonade.

Girls With Goals || Her · Ep.160: The Beauty Of Coaching - Hayley Harrison joins us from Sport Ireland
popular
Regé-Jean Page arrives in Ireland to shoot new movie
A pink tampon disposal glove has been created - by three men...
Government wants as wide a reopening as possible in May and June
Katie Holmes shares rare photo of daughter Suri to mark her 15th birthday
We're told to stay inside to stay safe, but Jennifer Poole was killed in her own home
Someone has ranked the penis size of men from all over the world
Khloe Kardashian has JUST confirmed she is pregnant
You may also like
8 months ago
M&S has brought out a new orange Aperitivo Spritz which is just what we need for the weekend
10 months ago
Getting into gardening? The Grow Your Own Cocktail kit is a great place to start
11 months ago
You deserve a frozen margarita so here's how to make the perfect one at home
1 year ago
When Dry January meets Friday night, this tropical mocktail recipe has you covered
1 year ago
The delish cocktail recipe that you absolutely need to make today
1 year ago
This Baileys Almande Iced Coffee Tahini Twist cocktail is making us SO thirsty
Next Page