It was made for a great reason, too.

If a bar of chocolate is placed on the Her desk, you can guarantee it will be devoured within three minutes. We all love the stuff - especially Cadbury's chocolate (it's the best, don't @ me).

Cadbury in India has just created the 'Unity Bar' to encourage consumers to embrace representation and diversity.

According to Insider, it combines the four types of chocolate; white, milk, blended and dark, to try and encourage people to celebrate "a rainbow of brown, a giant bouquet of mother tongues, a churring confluence of cultures."

This Independence Day, let's celebrate a country that stands united in its diversity. Presenting the Cadbury Unity Bar, India's first chocolate with dark, blended, milk and white chocolate all under one wrap. #CadburyUnityBar #IndependenceDay

The bar was displayed in The Economic Times during India's 73rd Independence Day. It was printed in Kannada, Telugu and Marathi languages, which some readers may not have understood. 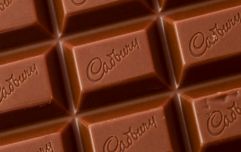 END_OF_DOCUMENT_TOKEN_TO_BE_REPLACED

The ad had the caption: "The headline above is not a misprint. It is in Kannada/Telugu/Marathi. It says—Sweet things happen, when we unite."

Many celebrated the bar online, saying that between the chocolate and the advertisement, it was a great idea to spread awareness.

Whoa!! Well done, Cadbury's (and Ogilvy), using a Kannada headline in the Mumbai edition, Telugu headline in the Delhi edition and a Marathi headline in the Bengaluru edition. Point made beautifully! Lovely idea that turns our usual Hindi-centric advertising on its head :) pic.twitter.com/XXXCdlcskG


popular
The PERFECT €22 Penneys dress everyone will be rushing to buy in the coming weeks
Louise Cooney just wore the most gorgeous €27 cream jumper from Marks and Spencer
The gorgeous Penneys trousers that are a must-have for your workwear wardrobe
Say hello to the perfect work dress, that will cost you just €19 in Penneys
Getting married in 2020? These ASOS bridesmaid dresses are seriously gorgeous
We just found the perfect 'jeans and a nice top' top, and it's only €17 in New Look
Penneys are now selling Riverdale t-shirts and yeah, we need them all
You may also like
1 year ago
You can get Dream bars in Ireland again and our day just got a whole lot better
1 year ago
Coconut Dairy Milk bars exist and we are very intrigued
2 years ago
Cadburys is hiring a chocolate taster and our dreams have come true
2 years ago
Here is a map of where all the white Creme Eggs have been found in Ireland
2 years ago
DELISH... Cadbury has revamped one of their most popular chocolate bars
2 years ago
A Cadbury's Creme Egg TRIFLE exists and wow, we're totally drooling
Next Page