Chrissy Teigen has shared her recipe of the banana bread that caused a social media storm.

The television host is currently working on her second cookbook, but there's been one recipe in particular that got people talking. 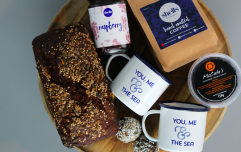 END_OF_DOCUMENT_TOKEN_TO_BE_REPLACED

She put out a request on Twitter for the fruit, adding that she would provide the supplier with a signed cookbook, her husband John Legend's underwear and a Becca palette.

As usual, the internet delivered - and one social media user was able to help Teigen complete the recipe.

Her mum Vilailuck even helped with the hand-off.

the deal has been done. thank you, @bymeg!!!! pic.twitter.com/f1wDrzO31Z

A couple of days after the social media storm settled, the model decided to give everyone an update into the progress of the snack by sharing the exact recipe on Instagram.

And it sounds absolutely mouth watering.

She wrote alongside it:

"Heading into the final week of recipe developing for #cravings2!!! You guys have been such a huge part of this one...

"I've loved seeing what you guys enjoyed making the most and learning what you want more of.

"And I miss posting food. I'm going to instagram a lot more freaking food and if you don't like it you can suck it! Love you."

Girls With Goals || Her · Ep.153: Scholarship Squad - We chat to Facebook's Claire O'Hara about our Smurfit Scholarship fund.
popular
Matthew Perry's dad was a character on Friends and how did we not notice?
Irish people urged to send a hug to loved ones on National Hugging Day in aid of Ronald McDonald House
Robbie Williams "fairly sick" with Covid while holidaying in Caribbean
Gwyneth Paltrow's vagina candle "explodes" in woman’s living room causing fire
Gilmore Girls star says he didn't storm the Capitol, praises those who did
Seven Things You May Not Have Known About... Garth Brooks
Here's what happens on every day of your menstrual cycle (roughly)
You may also like
5 days ago
5 of the best lower alcohol drinks if you can't quite commit to Dry Jan
6 days ago
Pet foods recalled after 70 dogs die in US
1 week ago
Same shit, new year: A brief history of diet culture and why it needs to go
1 week ago
Percy Pigs could cost more in Ireland thanks to Brexit, says M&S
2 weeks ago
Does weight loss still need to be the height of inspiration?
2 weeks ago
Terry's looks set to be launching white chocolate mini eggs for Easter
Next Page