Same, to be honest.

As a parent, you take a lot of pictures of your children.

Their first steps, the first words, their first day at school - it all needs to be documented meticulously, lest they one day accuse you of never teaching them how to stand up or sending them to be educated or whatever.

Another first that apparently needs to be documented is your child's first pizza.

After all, it is one of the most important milestones they'll ever reach in their life.

One dad who did just that was 30 for 30 podcast host Jody Avirgan.

He gave his daughter pizza for the first time, took a picture of it, and the rest, as they say, is history.

My daughter just tried pizza for the first time. pic.twitter.com/yiPNJgUBJg 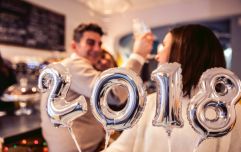 If you're celebrating with family tomorrow, this is what to drink

END_OF_DOCUMENT_TOKEN_TO_BE_REPLACED

Never related to a child so much in our lives, to be honest.

As it turns out, neither had a lot of other people either because Jody's tweet has already been favourited over 220,000 times and received over 50,000 retweets.

Not bad for a girl eating pizza.

Many Twitter users thanked Jody for sharing the photo of his daughter and for inspiring them to order pizza that day.

They also began talking about their own kids' favourite foods which include bacon, pancakes with syrup, and pizza, again.

popular
Love Island's Lucie and Luke have confirmed they are, indeed, dating
QUIZ: How well do you remember The Rugrats Movie?
Lidl launches own fake tan and it'll only set you back €3.99
Staycation: 7 gorgeous glamping spots for your Irish summer getaway
Womb stories: Bodyform's latest ad is a triumph for women's health portrayal
QUIZ: Can you name the Keanu Reeves movie from just the screenshot?
There's a Harry Potter themed Airbnb in Roscommon and we just need to visit
You may also like
2 months ago
Five items to raid from your parents’ wardrobes right now
3 months ago
Living in lockdown: Dublin woman Victoria McAuley tells Her what it's like in Rome right now
5 months ago
Aunts are 'as important as mums' when it comes to raising girls says parenting expert
6 months ago
Study finds that the eldest sibling is, in fact, the smartest
6 months ago
'It does eventually get boring': Suzanne Jackson opens up about starting a family
7 months ago
WIN a flight back to Ireland this Christmas to celebrate with the family
Next Page