Having a fry for breakfast is going to die out with the next generation, apparently

You can't beat a fry for breakfast sometimes.

With rashers, sausages, eggs, beans, friend mushrooms and whatever else you fancy added in, it's just so tasty. And if you have a hangover, it's certainly the cure.

Well, it seems like a fry up is going to die out with the next generation if this study is anything to go by. 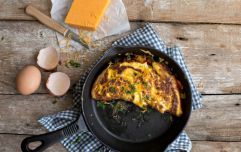 Breakfast, lunch and dinner: how to make your favourite meals tasty and nutritious

END_OF_DOCUMENT_TOKEN_TO_BE_REPLACED

The study was commissioned by online polling firm Ginger Research in the UK and found that one in five people under 30 have never had a fry before.

But why would anybody at all not be into a full fry up? Haven't they lived?

Well, out of the 2,000 people asked, 27 percent said it was the black pudding putting them off because it's just so unappealing, while 24 percent said it's the amount of grease that's a big no-no.

Other reasons included burnt fried eggs, overcooked bacon and processed sausages, while lukewarm baked beans was also a turn-off... and honestly, it just sounds like they have never had a good fry before.

It was also considered unhealthy, but sure it's not like you're having one every single day.

When asked what their ideal breakfast would be, we're not really surprised by the outcome. Scrambled eggs and salmon came out on top of the rankings with 71 per cent saying it was their ideal brekkie choice.

That was very closely followed by smashed avocado on rye bread with 70 per cent and oatmeal pancakes came in at 69 per cent.

Girls With Goals || Her · Ep.153: Scholarship Squad - We chat to Facebook's Claire O'Hara about our Smurfit Scholarship fund.
popular
'They're Dead To Me Now' - Kate And Oliver Hudson Have Been Disowned By Their Father
Someone has ranked the penis size of men from all over the world
So are we dating?... 10 signs it's time to define your relationship
Dad designs bikini line for transgender teens
Sex dreams: What do they mean and why do we have them?
I tried out the Patchology Poshpeel pedicure booties and it was an experience
Here's what happens on every day of your menstrual cycle (roughly)
You may also like
11 months ago
Making these lentil fritters for Sunday brunch is as simple as mix, fry, DEVOUR
1 year ago
Not a breakfast person? 3 handy meals you'll actually want to eat
1 year ago
3 delicious (and healthy) breakfast-in-a-bowl recipes to try this week
1 year ago
Nutritionist says eggs are an essential breakfast food and we're okay with that
1 year ago
Eating a banana for breakfast is actually a pretty bad idea
1 year ago
Pizza could be healthier than having cereal for breakfast
Next Page