Gordon's has launched a new Sicilian lemon distilled gin, bringing us the taste of Sicily

Brought to you by Gordon’s Sicilian Lemon Distilled Gin

Ah Sicily... the promise land of gin and happiness.

We haven't exactly had the summer of our dreams. There's been a lot of cancelled plans and disappointment but just because our bodies aren't venturing off into the sunset doesn't mean our minds can't! Enter Gordon's Sicilian Lemon Distilled gin.

If you're looking for the perfect, light refreshing-tasting drink that screams summer (lord knows we need it) then look no further.

Gordon's has done us all a solid and introduced a gin that may very well be able to save our summer season.

Made with the highest quality ingredients and using only natural flavourings, the (new) Sicilian lemon distilled gin is perfectly crafted to balance the juniper notes and refreshing taste of Gordon’s with some juicy lemons - straight from Sicily.

It's light, it tastes delightfully refreshing, it's akin to stepping out on a veranda in the Mediterranean sun, not a care in the world.

Have it in a cocktail, have it in a G&T, have it with some other form of mixer if that's your deal - just know that when you taste that refreshing citrus, you'll feel like you're not only visiting Sicily but that you have your own postcode. 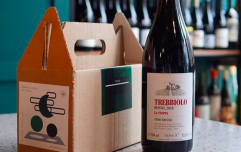 END_OF_DOCUMENT_TOKEN_TO_BE_REPLACED

Brought to you by Gordon’s Sicilian Lemon Distilled Gin

popular
'Beard-baiting' is now apparently a dating trend - and we're all for it
Curtain bangs are trending - here's everything you need to know
QUIZ: How well do you really remember the first episode of Sabrina The Teenage Witch?
Someone has ranked the penis size of men from all over the world
Eight Of The Best Films And Documentaries On 9/11
Will there be a second season of Gilmore Girls: A Year In The Life? Here's what we know
Cheese, chocolate or pasta? What your food cravings mean
You may also like
4 days ago
Mars to change name of Uncle Ben’s rice to Ben’s Original
5 days ago
10 Dublin restaurants with outdoor areas we'll be hitting up for the next 3 weeks
1 week ago
Dublin restaurant nominated for Best Luxury Steakhouse in the world award
1 week ago
Lindt has just opened a chocolate museum with a massive chocolate fountain
2 weeks ago
A controversial ranking of Lindt truffles from worst to best
2 weeks ago
Two Irish spots named among the best pizzerias in Europe
Next Page