Guinness has recalled its 0.0 alcohol-free cans in the UK over possible contamination concerns.

The company made the decision to recall all cans of the new product in the UK as a precautionary measure, as some of the cans may be "unsafe" to drink. 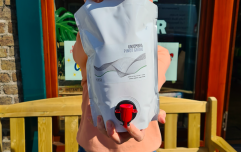 END_OF_DOCUMENT_TOKEN_TO_BE_REPLACED

Guinness 0.0 is not yet for sale in Ireland.

"As a precautionary measure we are recalling Guinness 0.0 in Great Britain because of a microbiological contamination which may make some cans of Guinness 0.0 unsafe to consume," said Guinness in a statement.

"Guinness 0.0 currently is not on sale to the general public in Ireland. The issue is isolated to Guinness 0.0 and does not impact any other Guinness variants or brands."

Guinness 0.0 was due to launch in Ireland this month. The new drink claims to boast the same “beautifully smooth taste, perfectly balanced flavour, and unique dark colour of Guinness, without the alcohol."

Taste tests by an independent panel found that Guinness 0.0 “exceeded expectations” and its taste was dubbed as “outstanding."

Girls With Goals || Her · Ep.160: The Beauty Of Coaching - Hayley Harrison joins us from Sport Ireland
popular
Penneys shopping by appointment booking portal is now live
ASOS is selling moob tubes and we all know someone who'd wear one
First Dates Ireland's Mateo Saina welcomes baby boy with partner Vjerana
"Irresponsible" Max Mara advert banned over "gaunt" model
More footage of Tristan Thompson cheating on Khloe has emerged
Sexual Experience Survey results: Over half of Irish women believe orgasmic sex is one of the top three greatest pleasures in life
Man discovers 'fake cupboard' in kitchen is actually a dishwasher
You may also like
2 days ago
You can get guacamole flavoured ice cream in Dublin this Cinco de Mayo
3 days ago
Stephen Donnelly to seek minimum alcohol unit pricing approval today
3 days ago
Irish people still super into salt, says research
6 days ago
Aperol Spritz ice lollies are what Bank Holidays weekend dreams are made of
1 week ago
You can buy Four Loko in Ireland now
1 week ago
Wham Bar, Cola Bottle and other retro ice pops are coming to Iceland this summer
Next Page