And they says maths isn't cool...

We love nothing more than sitting in on a Sunday night, watching a movie and ordering a pizza.

Special focus on the pizza, in our humble opinion. 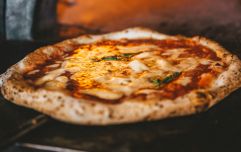 Two Irish spots named among the best pizzerias in Europe

END_OF_DOCUMENT_TOKEN_TO_BE_REPLACED

Anyway, if you have ever ordered a pizza with your pal, you've probably had the same thought.

What should we order?

Usually, we land on the same theory - two personal pizzas are bigger than one large.

So naturally, the two personals are ordered, even though it works out more expensive.

Well folks, mathematics has helped us to figure out that a large pizza will give you more bang for your buck.

Ordering two personal pizzas equates to 7 inches each, while a large pizza being 13.5 inches.

So we can see why you'd opt for the two personals. 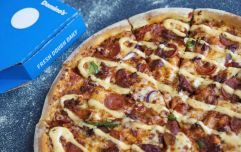 END_OF_DOCUMENT_TOKEN_TO_BE_REPLACED

Thanks to an equation used to measure surface area (NERD ALERT: π x radius²), you actually get more 'pizza' with a large, regardless of what the diameter of the pizza is.

The hack first did the rounds at the beginning of the year but since it's grim outside we're ordering pizza ASAP and this equation will come in handy.

@EduSum @aliceinframes I got a degree in mathematics just so I could draw this for you ??? pic.twitter.com/f1qCfKDzoK

There you have it now.

Girls With Goals || Her · Ep.160: The Beauty Of Coaching - Hayley Harrison joins us from Sport Ireland
popular
ASOS is selling moob tubes and we all know someone who'd wear one
Penneys shopping by appointment booking portal is now live
First Dates Ireland's Mateo Saina welcomes baby boy with partner Vjerana
Meghan and Harry share new photo of Archie to mark second birthday
More footage of Tristan Thompson cheating on Khloe has emerged
"Irresponsible" Max Mara advert banned over "gaunt" model
Soap Couple Announce Shock Split After 16 Years
You may also like
10 months ago
Feeling the #wfh stress? Here’s how to keep a good work/life balance during lockdown
10 months ago
Here's what we got up to at our very first Zoom Girls With Goals event
10 months ago
5 ways to create me time moments in your #wfh week
10 months ago
Days all blurring into one? Here’s how to get the Friday night feels at home
10 months ago
Pizza For One Party! Win a Momenti pizza and goodies hamper
10 months ago
Join our exclusive Girls With Goals live lockdown edition with Joanne McNally and MK Slattery
Next Page