If you haven't tried Halo Top ice cream before, where in God's name have you been?

Alright, we'll be honest, we haven't tried it either, but we've been hearing a lot about it over the past few years and it's definitely been on our food-bucket-list for quite some time.

Creamy, delicious, low-calorie... it's got everything you want from an ice cream.

And now, it's finally reached Ireland. 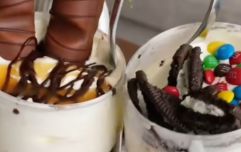 END_OF_DOCUMENT_TOKEN_TO_BE_REPLACED

Indeed, one of the US's most popular ice creams is now being sold in Tescos around Ireland and we absolutely cannot wait to sink our spoons into a few tubs of it.

With anywhere between 280 and 360 calories per tub, you can't go wrong really.

There's also an assortment of flavours to choose from too so if generic vanilla bean isn't your thing, why not chow down on some peanut butter cup or cinnamon roll or cookie dough goodness.

We're salivating just thinking about it, to be honest. 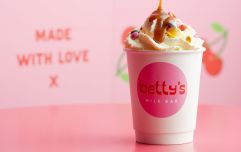 END_OF_DOCUMENT_TOKEN_TO_BE_REPLACED

Now, we know what you're thinking - what's the catch? How can a tub of ice cream have so few calories?

Well we'll tell you how.

Halo Top use a sugar substitute called Stevia. They also throw another thing in there called Erythritol - a natural sweetener that's found in some fruits.

Their ice cream is low in fat, high in protein, and basically a healthier treat than your average run-of-the-mill ice cream.

Oh, and the tubs they sell are 473ml instead of your typical 500ml but sure look, that's hardly a difference.

Halo Top ice cream is currently selling in Tesco for €6.49.

popular
Here are the baby name trends set to dominate 2023
5 delicious brunch spots around Ireland to try out on your next trip with the girls
Here is the reported I'm A Celeb All Stars line-up
Two Love Island 2022 stars have just become step siblings...
Hailey Bieber shuts down rumours she dated Justin while he was with Selena Gomez
Molly Mae Hague shares emotional moment she discovered she was pregnant
ITV boss defends Phil and Holly once more
You may also like
1 year ago
You can get Scrumdiddly's ice cream tubs in Tesco soon
1 year ago
Dublin's Eatyard is serving boozy 99s now
1 year ago
Ferrero Rocher ice cream is happening this summer
2 years ago
Tickled pink! Magnum has just released a ruby chocolate covered ice cream
2 years ago
A museum of ice cream has opened its doors in NYC and it's the cream dream
2 years ago
Halo Top just released some delicious new flavours, and we're drooling tbh
Next Page