Of all the primary fast foot outlets, McDonald's clearly have the best chips. Burger King's chips are fine, but nothing more so. Five Guys are a contender, but have some way to go before becoming a primary outlet.

But right, right at the bottom of the greasy bag of fries is KFC. Soggy, limp, unsalted, flavourless. Can't fault the chicken, and there's something special about KFC beans, but the chips are notoriously rubbish.

Recently Twitter users had noticed that KFC were promoting tweets that were slagging off their chips. A bizarre tactic, and one that had people scratching their heads.

Ok this is correct but why is kfc promoting it? Plus if you like kfc chips you're wrong pic.twitter.com/Bq16xEhuOC

Well, the reason for this has become clear: KFC are ditching their unloved fries and are bringing in a new recipe to win chip fans back. 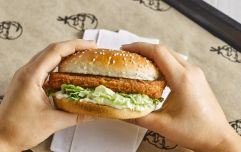 END_OF_DOCUMENT_TOKEN_TO_BE_REPLACED

“KFC has seriously stepped up its game with a thicker, chunkier and tastier spud,” KFC said in a press release, which referenced the tweets having a pop at their chips.

"They took a matter of moments to write, but they’ve lingered long and heavily in our hearts," the press release continued.

“Instead of crying into our (soggy) fries, we’ve decided to take action. Radical, potato-fuelled action. KFC tested virtually every type of potato and cut to find the perfect variety."

So what can we expect from KFC's new chips? Expect chunk, and expect skin-on.

“As well as standing taller and wider (all the better for dipping with), the whole spud is used with the skin left on for a natural, rustic appearance and amazing taste," the chicken-slingers said.

According to KFC, the new fries have been tested in select UK restaurants and have gone down a storm.

So when can we expect to see these bad boys in Ireland then?

Well, the new-look chips will be rolled out to all UK restaurants from November 19, soooo we're going to go head and assume we'll be seeing them pretty soon too.

You told us no one liked our fries.

So new ones are coming soon.

Perhaps this is it, then.

KFC may be about to change the game. It's been a long time coming, and honestly, how could it get any worse?


popular
Love Island's Lucie and Luke have confirmed they are, indeed, dating
QUIZ: How well do you remember The Rugrats Movie?
Lidl launches own fake tan and it'll only set you back €3.99
Staycation: 7 gorgeous glamping spots for your Irish summer getaway
There's a Harry Potter themed Airbnb in Roscommon and we just need to visit
QUIZ: Can you name the Keanu Reeves movie from just the screenshot?
Boohoo has promised to investigate supplier over claims it paid workers less than €4 an hour
You may also like
5 months ago
Woman left 'heartbroken' after biting vegan KFC burger and finding chicken inside
9 months ago
KFC are doing a fried chicken donut burger and yes, you did read that correctly
9 months ago
KFC gravy candles exist and we couldn't think of anything worse
10 months ago
KFC is now offering vegan chicken wings and nuggets in the States
1 year ago
KFC has now added mash potato to its menu in Ireland
1 year ago
Say 'I love you' this Valentine's Day with KFC's chicken tenders bouquet
Next Page