Henceforth known as "The Straw".

The milkshakes that McDonald's serve are good enough to bring all the boys to the yard, but they're like, it's better than yours because they're experts in the field of sugary delights.

We know that this sentence makes absolutely no sense, but we wanted to shoehorn in a Kelis reference somehow.

If you're a milkshake aficionado then you'll definitely relate to the eternal struggle of trying to suck up the delicious strawberry or chocolatey delights, only to be thwarted by a combination of gravity, pressure and the small circumference of a straw.

It's a bit like that episode of Friends when Joey couldn't open a milk carton.

What's required is a new invention/apparatus/vessel/consumption aid/whatever the hell you want to call a straw - and McDonald’s have responded.

Simply known as 'The Straw', the new J-shaped design is different from similar straws because it has holes that are placed at the sides. 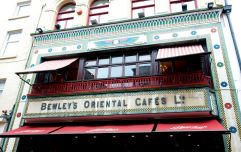 END_OF_DOCUMENT_TOKEN_TO_BE_REPLACED

For the moment, 'The Straw' is only available in the U.S. and supply is limited because only 2,000 units were made.

While we don't have a direct hotline to Ronald McDonald, we're confident in assuming that we'll be seeing these new prototypes being rolled out to an international audience.

After all, it would really suck if milkshake lovers were deprived of this potential game changer.

popular
Paul Mescal didn't win an Emmy and that's okay
5 Netflix releases to keep an eye out for in October
QUIZ: How well do you remember the first episode of Gilmore Girls?
Selling Sunset's Chrishell Stause reveals "the brokerage has split"
There's a Friends makeup collection coming, featuring Phoebe, Monica, and Rachel palettes
The sentimental engagement ring trend you're going to see a lot of for the rest of this year
Someone has ranked the penis size of men from all over the world
You may also like
2 days ago
"Many will be upset..." Dublin to move to Level 3 from midnight, Taoiseach confirms
2 days ago
It'll take Ireland 55 years to bridge the gender pay gap
3 days ago
Netflix's Cheer star Jerry Harris arrested on child sex images charge
4 days ago
Covid-19: Dublin likely to move to Level 3 restrictions before this weekend
5 days ago
Living with Covid: Here's what levels 1-5 mean for social gatherings, wet pubs, and weddings
5 days ago
Further Covid restrictions announced for Dublin, government confirms
Next Page