They make the Kit Kat, Lion, Aero and Quality Street among many others.

Over the next few weeks, Irish households will be stocking up on Christmas goodies as preparations for the festive period go into overdrive, and it's very likely that you'll be tucking into some of your favourite chocolate bars over the course of the month.

In a progressive move, the Swiss manufacturer Nestlé  have announced that they plan on reducing the amount of sugar in their products by 40% after their researchers found a way to structure sugar differently. 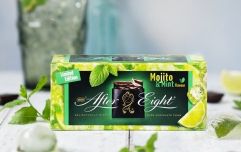 Mojito flavoured After Eights are coming to Irish shops

END_OF_DOCUMENT_TOKEN_TO_BE_REPLACED

According to their recent research, "even when much less sugar is used in chocolate, your tongue perceives an almost identical sweetness to before."

The new faster dissolving sugar will enable Nestlé to significantly reduce the total sugar in its confectionery products, while ensuring that the taste remains the same.

“This truly groundbreaking research is inspired by nature and has the potential to reduce total sugar by up to 40% in our confectionery. Our scientists have discovered a completely new way to use a traditional, natural ingredient”, said Stefan Catsicas, Nestlé Chief Technology Officer.

Nestlé is patenting its findings and will begin to use the new sugar across a range of its confectionery products from 2018 onwards.

popular
Lidl closing early this weekend to thank staff for hard work
Simon Harris gives three urgent options for easing restrictions next week
Squid Game fans spot massive clue in Tug of War game
The First Quadrillionaire? Paypal Accidentally Gives Man $92 Quadrillion
11 Halloween costumes that nobody else will be doing
Someone has ranked the penis size of men from all over the world
Husband of world champion runner Agnes Tirop arrested over death
You may also like
3 months ago
Ferrero's hazelnut chocolate wafer bars are coming to Ireland
3 months ago
Salted caramel Munchies are coming to Ireland next month
4 months ago
Cadbury have launched chocolate gift card boxes and they're the perfect way to treat your loved one
8 months ago
Chocolate company launches look-a-like bars to raise awareness of child labour
9 months ago
M&S is now selling chocolate sausage dogs called Walter
9 months ago
Terry's looks set to be launching white chocolate mini eggs for Easter
Next Page