This pasta straining trick has completely blown our minds

Our minds are blown.

We've got some bad news - it turns out we all might've been making pasta wrong our whole lives.

Or straining it wrong, at least. 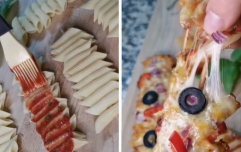 END_OF_DOCUMENT_TOKEN_TO_BE_REPLACED

The easy-to-make meal is often one of the first things that people learn how to cook, mostly because it's very difficult to mess up.

But Twitter user @Daibella recently shared a series of screen grabs that have blown our pasta-loving minds.

And probably proven we've been making it wrong our whole lives.

Good morning to everyone. Just saw this on Facebook and spazzed. pic.twitter.com/YB8qJ2a1g5 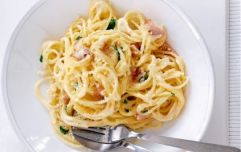 END_OF_DOCUMENT_TOKEN_TO_BE_REPLACED

We would normally put the colander in the sink and pour the boiling pot of water into it (while hoping there's no splash back onto our skin), before re-adding the noodles back into the pot while mixing in sauces and other ingredients.

But it turns out we may've been doing it wrong this entire time.

@Daibella's photo series shows a sieve being placed on top of the boiling pot, where it fits snuggly, before dumping out the water straight into the sink.

The cooking hack first emerged on social media earlier this week and has since gotten 34,000 retweets and almost 75,000 likes.

And while plenty of people were quick to praise the pasta trick, others weren't so sure about the idea.

"He's one handing it? How does the spaghetti not just slip through the other side?"

popular
Stacey Solomon reveals she's having a baby girl
Adam Collard opens up on dating life since Paige Thorne split
Gaz Beadle reveals his wife Emma McVey is undergoing heart surgery
Man claims to have found infant remains near Bessborough site in the 90s
Barry Keoghan dedicates Oscar nomination to his baby son
Why Are Men so Obsessed With Boobs? The Answer is Pretty Surprising...
Dani Dyer shares dad Danny's reaction to news she's having twins
You may also like
1 year ago
Aldi to trial loose pasta and rice to reduce plastic waste in UK
3 years ago
Nutella PASTA is now a thing and it looks weirdly delicious
3 years ago
You can now get paid over €5k to eat nothing but pasta and bread
3 years ago
This super simple pasta recipe is your saviour if you're stuck for time
3 years ago
Cheesy, creamy lemon pasta is the hangover fix you need in your life
3 years ago
Public service announcement: Eating pasta and bread might make you live longer
Next Page