People are losing their minds over this so-called 'vegan lasagne'

If you're in any way averse to vegan foods, please know that the vast majority of them are delicious.

Vegan bacon cheeseburger? So incredible that you'll scarcely remember your own name after you've finished eating one.

Vegan doesn't mean boring, and it certainly doesn't mean lacking in nutrients either, but sure listen, we all know this - it's not news, and nor is it shocking.

What is shocking, however, is this so-called 'vegan lasagne' that an office full of people were forced to experience recently.

This is the, ahem, dish.

Shared by Twitter user 'Peaches,' she said that a coworker subjected people to the dish earlier this week "... and I'm ready to know all that shit over."

The lasagne (which isn't much of a lasagne at all) appears to be comprised of sliced uncooked tomatoes, pasta sheets, and lettuce (?).

Grim, and yet, someone took a hefty enough piece out of it in fairness. 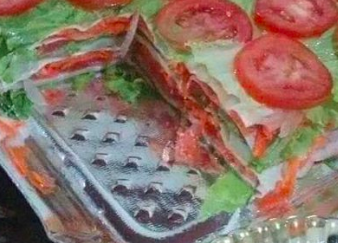 Twitter users were understandably horrified by the lasagne and took it upon themselves to question why this person had incorrectly assumed that such a dish would suffice as a 'lasagne.'

Because it does not.

Unacceptable, in every way.

It later became apparent that another person had shared the same image on Reddit the night before, meaning that Peaches had not been presented with the lasagne at work at all, but rather merely spotted it on the internet.

Why do you lie to us, Peaches?

The original poster shared the image with the caption 'salad lasagne' which yes, definitely does make it that bit less harrowing.

But still not all that appetising.


popular
David Beckham shared his dinner on social media and we really wish he hadn't
#Covid-19: Kim Kardashian says lockdown has made her realise she doesn't want more kids
The great way to relieve PMS symptoms a friend told me about – and it really works
5 new additions to Netflix to spend your weekend watching
10 summmer dresses we are ordering this week to cheer ourselves up
RTÉ share details of new classic movie schedule - and it all kicks off tomorrow
19 brilliant books to read while you're social distancing
You may also like
1 week ago
Feeling creative? Whip up some Butler's chocolate apple lollipops, sure
1 week ago
3 smoothie bowl breakfasts to keep your immune system good and strong
1 week ago
#Covid-19: Just Eat to invest €1m package to support restaurant sector amid coronavirus outbreak
2 weeks ago
Happy National Jambon Day: a tentative celebration during this trying time
2 weeks ago
3 St Patrick's Day cocktails you can make tonight with minimal ingredients
3 weeks ago
Dublin is the third most expensive city in the world for fish and chips
Next Page