Veganism is seen by many as the natural choice for protecting the environment, but it needn't be this way.

There is no doubting the huge environmental consequences farming and livestock industries inflict on the planet. However, you don't need to go full vegan to reduce your own impact, according to dietitian Kiri Elliott.

"Agriculture and livestock farming are by far the biggest contributors to greenhouse gas emissions, deforestation, biodiversity loss, and soil pollution, as well as land and water use.

"Compared to the typical UK diet, a vegan diet has a significantly lower carbon foot print and is associated with lower greenhouse gas emissions.

"However, you don't have to go vegan to have a positive impact on the environment. For example, the average intake of meat by adults in the UK is 108 grams (think a 4 oz steak). If this was reduced to 50g per day (a 2 oz steak), the carbon foot print is reduced by 39 percent. Also evidence suggests that 25 percent of all food purchased in the UK is wasted, addressing this would also have a huge impact on our greenhouse gas emissions and carbon footprint."

Is veganism a healthy choice?

Many vegan foods contain a high number of essential vitamins, minerals and nutrients, but your body also needs micronutrients present in animal protein.

B vitamins, which are pivotal for energy production, are found in their highest quantity in meat and poultry.

Can you still build muscle as a vegan?

While the Western world probably needs to drop its meat intake somewhat, the branched chain amino acids and essential amino acids present in meat make it a valuable source of muscle-building nutrition. 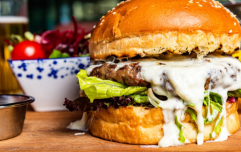 Experts says it's better to eat TWO burgers, rather than a burger and side

END_OF_DOCUMENT_TOKEN_TO_BE_REPLACED

Whereas a chicken breast or salmon fillet makes up the 25-30 grams of protein needed per meal, there aren't many vegan sources which live up to this billing. If you've gone plant-based, you'll instead need to combine a variety of vegan proteins.

popular
Lidl closing early this weekend to thank staff for hard work
Simon Harris gives three urgent options for easing restrictions next week
Squid Game fans spot massive clue in Tug of War game
The First Quadrillionaire? Paypal Accidentally Gives Man $92 Quadrillion
11 Halloween costumes that nobody else will be doing
Someone has ranked the penis size of men from all over the world
Husband of world champion runner Agnes Tirop arrested over death
You may also like
1 month ago
Opinion: The case for exercising without metrics
2 months ago
The dangers of diet culture - and how we can rethink it
3 months ago
We need to stop asking vegetarians why they don’t eat meat
9 months ago
The Body Coach Joe Wicks' PE classes are back for lockdown
1 year ago
Intermittent fasting is not good for weight loss, study says
1 year ago
Bodybuilder explains why you don't need to "eat clean" to lose weight
Next Page