We can now officially blame science for our poor choices.

Scientists have argued that it is possible to create an "addictiveness scale" in order to determine which processed food is the "crack cocaine" of the food world.

The study authors at the University of Michigan characterise addictiveness by factors such as “loss of control over consumption, continued use despite negative consequences, and an inability to cut down despite the desire to do so.”

For the study, 120 undergraduate students filled out the Yale Food Addiction Scale to determine their substance dependence.

They were then shown pictures of 35 common foods in pairs and asked to choose which food was more likely to produce addiction symptoms as listed above.

Chocolate came up most often, followed by ice cream and french fries - however, the researchers were still not convinced they had found the most addictive food out there.

They went back to the drawing board and asked a further 384 people to rate the addictiveness of the foods on a scale of 1-7. 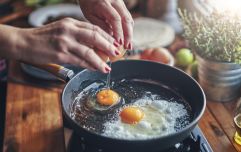 END_OF_DOCUMENT_TOKEN_TO_BE_REPLACED

According to IFLS, the clear winner with this larger and more comprehensive research was pizza, with an average score of 4.01.

Next came chocolate and chips with a joint rating of 3.73.

All of the foods which rated highly were, unsurprisingly, highly processed and rich in sugar, fat, or both.

At the other end of the scale, the least addictive foods were cucumber, carrots and beans.

We could have told you that.

popular
This amazing hanging egg chair is coming into Aldi next week and go, go go (but safely)!
Lidl is launching a new hyaluronic skincare range and the serum is only €3.49
After days of silence, Scott and Sofia finally comment on the break up rumours
Richard Corrigan offering €90,000 wedding package prize for one Irish frontline healthcare worker
Patrick Dempsey Denies He Was Fired From Grey's Anatomy For Having An Affair With Intern
The Dalkey gaff where Matt Damon stayed during lockdown will be available to rent again soon
Thursday set to be the hottest day of the year, says Met Éireann
You may also like
3 months ago
Drinking coffee can help ease pain in some cases, according to research
6 months ago
Eating a banana for breakfast is actually a pretty bad idea
8 months ago
Got your period? Try to avoid these foods as much as possible
9 months ago
This is why you should avoid ordering soup when out for a meal
1 year ago
Study shows people who go to sleep at this time consume more calories
1 year ago
Apparently, indulging in your morning fix of coffee can benefit you
Next Page