There's a Mean Girls-themed pop up restaurant opening and it sounds SO fetch.

Which, coincidentally, is also the name of the restaurant itself.

Yes, FETCH, a Mean Girls themed pop-up restaurant, has just released tickets for its Los Angeles location. They will be opening their doors from April 18 until March 31.

Tickets cost $45 and include a 3-course prix fixe meal and 90-minute timed entry into the restaurant. Diners can choose from a number of Mean Girls themed appetisers, mains and desserts.

Here's what the menu includes: 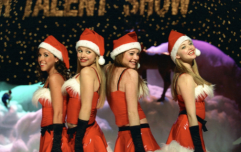 END_OF_DOCUMENT_TOKEN_TO_BE_REPLACED

Diners can also purchase branded merchandise or one of FETCH’s extensive alcoholic beverages, including the Too Gay to Function Fishbowl to the Spiked Glen Coco.

Diners can expect to enjoy Mean Girls themed photo opportunities on-site, as well as the soundtrack and movie playing as the world’s fetchest ambiance.

The dress code is casual, except for Wednesdays - then, of course, diners should wear pink.

You can find out more information about FETCH - or, if you happen to be in Los Angeles while the restaurant is open, book tickets - right here.

popular
Stevie Nicks leads tributes following the death of Christine McVie
Gwen Stefani reportedly pregnant with baby number four
Gifts for Him: 18 affordable presents for your old fella, brother or boyfriend this Christmas
Here are the first four people officially heading onto Dancing With The Stars
Mollie King announces death of her father just weeks after welcoming her first child
"You can’t imagine what it feels to have had a baby and yet feel like you didn’t"
Why Are Men so Obsessed With Boobs? The Answer is Pretty Surprising...
You may also like
2 weeks ago
Jonathan Bennett wants to reunite with Lindsay Lohan for a new Christmas film
6 months ago
WATCH: Deleted Mean Girls clip shows Cady and Regina face off at prom
8 months ago
Mean Girls actor Jonathan Bennett marries long-term boyfriend
1 year ago
Mean Girls Broadway stars announce engagement
2 years ago
QUIZ: How well can you remember Mean Girls?
2 years ago
Mean Girls the Musical is being turned into a movie and we're so excited
Next Page