As the temperatures continue to climb, grabbing an iced coffee is becoming a firm must-have (as well as being a pretty good way to cool down).

While the official menu at any Starbucks is usually limited to what you see up on the boards, you can give your coffee an extra boost if you order off the secret menu - provided you know the right tricks.

It turns out that there's an app entirely devoted to Starbucks' secret menu, and its filled with recipes for hundreds of different drinks.

The app, called the Secret Menu for Starbucks!, has everything within it.

And we mean everything. 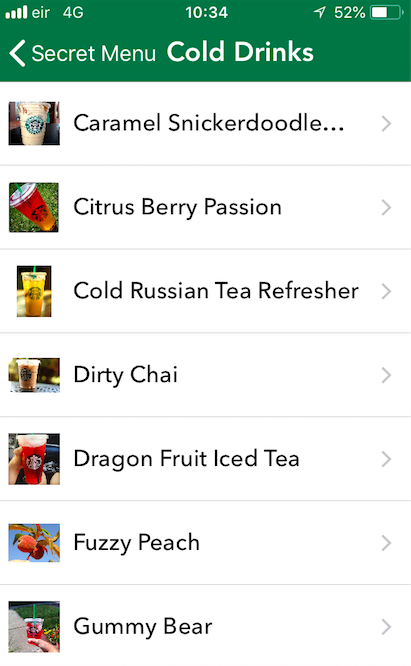 Like, there's even a recipe for a Nutella Frappuccino.

Which, FYI, is as follows:

And then there's the Caramel Cookie Bar, which if it tastes as good as it looks, we reckon we're in for a treat. 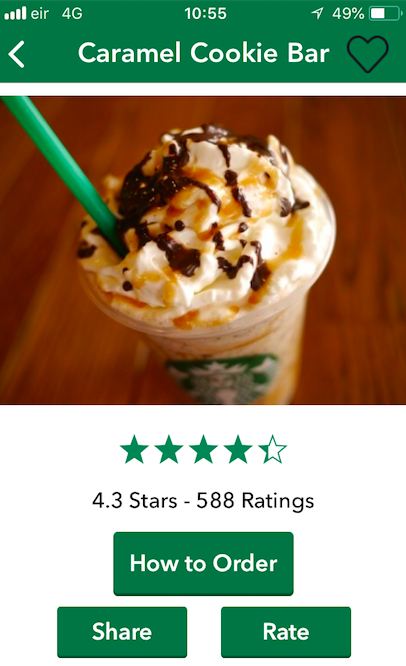 To get your hands on one of these...

Basically, they're a dream come true - especially with the weather being what it is at the moment.

While we're a little reluctant to go diving into the recipes for hot drinks, it looks like they've got plenty of different (and delicious) treats to keep coffee fans going during the colder months, too. 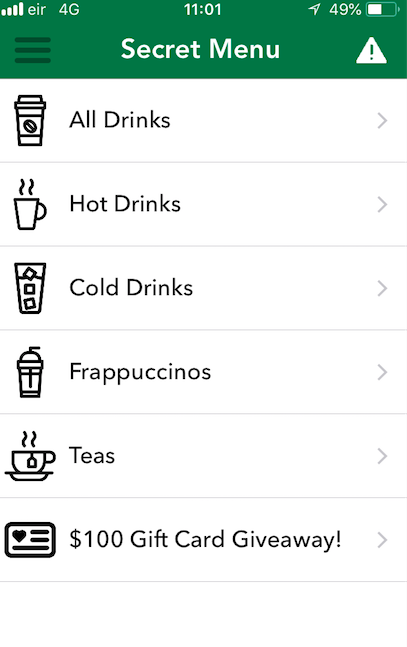 Now, if you don't mind us, we're just going to be legging it to the nearest Starbucks for one of those Nutella frappuccinos.

popular
'Beard-baiting' is now apparently a dating trend - and we're all for it
Cheese, chocolate or pasta? What your food cravings mean
Curtain bangs are trending - here's everything you need to know
10 women on the relationship deal-breakers they learned the hard way
Rose Leslie and Kit Harington share baby news with super cute photo
QUIZ: How well do you really remember the first episode of Sabrina The Teenage Witch?
QUIZ: Can you name all 32 counties in Ireland in under 4 minutes?
You may also like
7 months ago
Starbucks' latest ad is a powerful leap forward for transgender visibility
10 months ago
The limited edition Starbucks Christmas drinks are here, and they sound delicious
11 months ago
The Phantom Frappuccino is the Starbucks Halloween special for 2019, and it's pretty strange
11 months ago
Here's how to order Starbucks' Pumpkin Birthday Cake Latte
1 year ago
The Cinderella Latte is the dreamy Starbucks drink you need to try this autumn
1 year ago
PSA: Pumpkin Spice Lattes are returning to Starbucks in less than a week
Next Page