Yep, one is up for sale... and to be fair, it doesn't look that bad for being over 100 years old. We still wouldn't eat it though.

The bars, which belonged to a First World War hero, will go up for auction next week after they were discovered with an entire box of war memorabilia. 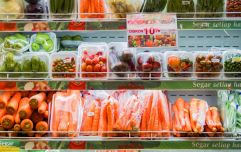 END_OF_DOCUMENT_TOKEN_TO_BE_REPLACED

The gift tin, which was sent to troops serving in the trenches in France during the first Christmas of WWI, had the chocolate inside and only one out of the ten bars were eaten.

Paul Cooper of Scunthorpe-based auctioneers Eddisons CJM said: “The colonies chocolate was sent to troops in that first winter of the war. Trinidad, Grenada and St Lucia provided the cocoa.

"Cadburys made the chocolate bars. The tin was made by Barringer Wallis & Manners of Mansfield, one of the world’s leading manufacturers of decorative tinware. Even the container is rare but to find the chocolate still inside is just unreal.”

“The chocolate actually looks in pretty good shape, although I have to admit that I wouldn’t be tempted to give it a go, even if the experts say that actually chocolate seldom becomes really dangerous over time, but it does lose its flavor and texture. I think they probably did not have century-old bars of the stuff in mind!”

popular
Lidl closing early this weekend to thank staff for hard work
Simon Harris gives three urgent options for easing restrictions next week
Unusual summer temperatures are on their way this weekend
Tributes paid to Limerick based blogger and model Patrick McLoughney
The First Quadrillionaire? Paypal Accidentally Gives Man $92 Quadrillion
Woman Hits Out After Being Called 'Ugliest Bride Ever' On Her Wedding Photographer's Facebook Page
Squid Game fans spot massive clue in Tug of War game
You may also like
21 hours ago
Shredded Banksy work sells for €21.9 million
2 years ago
This Harry Potter book is selling for €35,000 for one special reason
4 years ago
Harry Potter souvenirs are up for sale and they're mega pricey
4 years ago
A piece of cake from Kate and Will's wedding is going up for auction
4 years ago
Ireland's first ever lost luggage auction is taking place and it sounds unreal
4 years ago
There is a huge bridal auction taking place in October
Next Page