Don't panic, but, a champagne shortage could be on the way. The reason being that the Champagne region, in north-east France where champagne is made, has been majorly affected by rot, frost and mildew which have depleted the levels of grapes in the area.

According to Decenter, the Côte des Bar region, home to a quarter of the Champagne vineyards, was hit by late frost in spring this year. One winemaker, Jean Pierre Fleury, saw a drop of 70% in his potential harvest as a result. 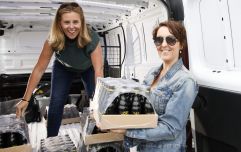 Beekon Batches: The fermented honey alcohol that's got bee conservation at its heart

END_OF_DOCUMENT_TOKEN_TO_BE_REPLACED

Later on in the season the area was affected by hailstones which resulted in a mildew problem.

Due to the rot, mildew and lack of grapes there might be a champagne shortage on the way. They are expecting 2,500 to 3,000 kg per hectare, in comparion with the 10,700 kg per hectares which would usually be expect.

A local agronomic agency did some tests on the area and found 99% of vineyards had signs of mildew, with 34% of them having more than 10% loss in yield as a result.

Before we go stocking up or turning to prosecco, some of the local growers and winemakers have some reserves of champagne, which will be used as a supplement where there are major shortages.

It won't be the long term solution but hopefully it will act as a support for the lack of champagne being produced this year.

Girls With Goals || Her · Ep.153: Scholarship Squad - We chat to Facebook's Claire O'Hara about our Smurfit Scholarship fund.
popular
Dad designs bikini line for transgender teens
Where are they now? The men of Sex & The City
REVIEW: 'Pilgrim Hill' - A Lonely Life in Rural Ireland
Someone has ranked the penis size of men from all over the world
Award winning Irish film about conversion therapy debuting this weekend
Here's what happens on every day of your menstrual cycle (roughly)
Kate Middleton has addressed the rumours that she's pregnant with her fourth child
You may also like
4 days ago
A café in Sligo has created a breakfast in bed treat box for two for Valentine's Day
4 days ago
Nutella Biscuits have arrived in Ireland
6 days ago
Here's how to do the genius TikTok wrap hack that everyone's going mad for
1 week ago
5 of the best lower alcohol drinks if you can't quite commit to Dry Jan
1 week ago
Pet foods recalled after 70 dogs die in US
1 week ago
Same shit, new year: A brief history of diet culture and why it needs to go
Next Page