What Emily Ratajkowski eats in a day is actually super surprising

She claims not to hit the gym much though and instead prefers hiking and yoga.

"I really like being outside and doing yoga, so I do a lot of hiking in L.A. and I have a yoga studio really close to my house that I go to like once a week.

"I don't have a trainer…I'm just not a crazy fitness person. I'm definitely an outlier in the industry."

The results pretty much speak for themselves.

As for her diet? She eats a surprising amount of carbs.

"Every day I go to Blacktop Coffee and get this pastry called kouign-amannwith my black coffee," she told Harper's Bazaar US. 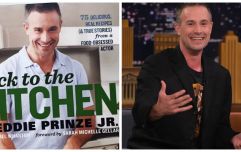 END_OF_DOCUMENT_TOKEN_TO_BE_REPLACED

She likes to take a lighter lunch, usually a salad or sandwich.

"If I'm on set, I'll have catering, but I'm well behaved with that stuff. It's easy to go crazy—they know how to feed you."

For dinner, her tastes vary.

"I love this Italian restaurant downtown called Bestia. It's kind of fun, and they have good cocktails and wine.

"If I'm trying to be a little healthier, there's Café Gratitude downtown," she added.

She's also a self-proclaimed carnivore and also loves to cook for herself.

"You know how much salt and sugar and all of that kind of stuff you are putting in your body."

So there you go - yoga, pastries, veggie juices and sushi.

We have to believe that Emily has some killer genes too because there's no way we could live like that and look like her.