You'll be only delighted about the new addition to Krispy Kreme

If you're a doughnut fan then you're probably already delighted that Krispy Kreme is coming to Dublin.

The US doughnut chain announced the news that it will set up its first shop in Ireland later this year, and now planning permission has been proposed for its location in Blanchardstown.

END_OF_DOCUMENT_TOKEN_TO_BE_REPLACED

However, if you're not from the Blanch area, it might seem like a bit of a trek to get there.

Well... we're not going to lie, it probably will be a trek... BUT it has just been confirmed that an additional drive-thru will be built on the side of the store, making grabbing a doughnut even easier than before. 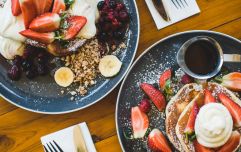 END_OF_DOCUMENT_TOKEN_TO_BE_REPLACED

The planning permission grant was published on the Fingal County Council website this week, saying, "food production area for the proposed cafe/restaurant use, which will also provide for distribution of produce to other outlets, and a drive-through facility."