So, is it true? Does chocolate make you smarter?

This is the best news we've heard in a while.

Over the years we have found more and more excuses to eat chocolate - not that we ever needed one.

And now, a (very welcomed) study suggests that eating chocolate makes you smarter. 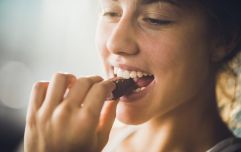 END_OF_DOCUMENT_TOKEN_TO_BE_REPLACED

The research was based on lifestyle information, originally collected by the Maine-Syracuse Longitudinal Study (MSLS) which has been monitoring the health of nearly 2000 individuals since 1976.

The result was delightfully surprising.  There were significant positive associations between high frequency chocolate in-take and a positive performance in cognitive tests.

popular
Britney Spears asks fans to respect her privacy after police call to house
Stacey Solomon reveals she's having a baby girl
Adam Collard opens up on dating life since Paige Thorne split
Gaz Beadle reveals his wife Emma McVey is undergoing heart surgery
Barry Keoghan dedicates Oscar nomination to his baby son
Mum who lost baby after home birth claims maternity hospital failed to share medical details
Dancing with the Stars viewers furious after judges overscore Suzanne Jackson
You may also like
2 months ago
Bounty bars to disappear from Celebrations tubs this Christmas
10 months ago
You can now get a perfume that smells like Mini Eggs
11 months ago
Apparently hot chocolate and hot cocoa are not the same thing... at all
1 year ago
Cadbury's vegan Dairy Milk has finally arrived in Ireland
1 year ago
Send chocolate to someone you love this Christmas and support a worthy cause at the same time
1 year ago
Cadbury have unveiled their Christmas chocolate range and it looks incredible
Next Page