Does it break? Doctors examined a lot of women to bust the hymen myth

What's the first thing that you think of when you hear the word 'hymen'?

Probably that it breaks the first time you have sex, yeah?

That's the rumour anyway - that the first time a woman has penetrative sex, her hymen will break, she will bleed, and probably be in a mild to considerable amount of pain.

In some cases, the myth even goes so far as to suggest that the hymen disappears entirely once penetration occurs, making it the defining factor in determining whether a woman is a virgin or not. 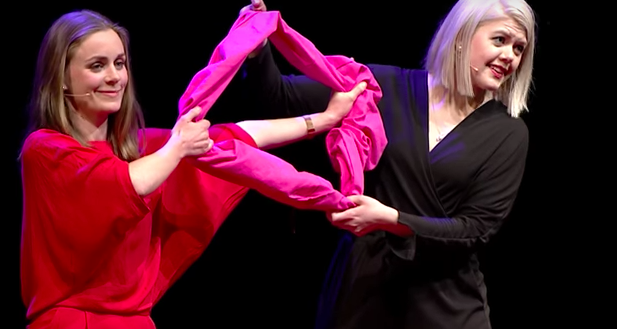 Health professionals Nina Brochmann and Ellen Støkken Dahl recently gave a talk at TEDx Oslo and they obliterated some of the most common myths about the hymen and virginity.

END_OF_DOCUMENT_TOKEN_TO_BE_REPLACED

The first myth the women tackled was that the hymen "breaks" the first time a woman has vaginal intercourse.

According to Brochmann and Støkken Dahl, this is inaccurate because every woman's body is different, meaning that every hymen is going to be different too.

It would make sense then that the feeling of being penetrated is going to be fairly unique to whoever is experiencing it.

"The hymen is a rim of tissue at the outer opening of the vagina. And usually, it has a doughnut, or a half moon shape, with a large central hole.

"But this varies a lot and sometimes hymens have fringes, several holes or it can consist of lobes."

END_OF_DOCUMENT_TOKEN_TO_BE_REPLACED

A lot of hymens (about 50 percent) are even elastic, meaning that the woman in question won't bleed from penetrative sex at all.

The second myth the women addressed was that the hymen becomes "lost" the first time a woman has penetrative sex.

Here, Brochmann and Støkken Dahl cited a study that examined the vaginas of 36 young pregnant women.

Only two of the women showed clear signs of penetration, which would mean that if the hymen myth is to be adhered to, the other 34 women were technically virgins.

Except they weren't... because they were pregnant.

The women also used a giant scrunchy and a hula-hoop to demonstrate exactly what the hymen does and doesn't do when it's penetrated.

The hymen can often stretch enough to allow room for a penis without causing too much damage.

In other cases where the hymen is not elastic, it may tear a bit causing bleeding, but it doesn't disappear.

And at the end of the day, virginity as a concept is becoming more and more irrelevant as time goes on.

So, really, 'testing' for virginity is both impossible and pointless.

popular
Stevie Nicks leads tributes following the death of Christine McVie
Why Are Men so Obsessed With Boobs? The Answer is Pretty Surprising...
Gifts for Him: 18 affordable presents for your old fella, brother or boyfriend this Christmas
Mollie King announces death of her father just weeks after welcoming her first child
Here are the first four people officially heading onto Dancing With The Stars
Gwen Stefani reportedly pregnant with baby number four
Revealed: The correct date you should be putting up the Christmas tree
You may also like
1 month ago
A sex expert's advice for women going through menopause
6 months ago
People with many sexual partners need to watch out for monkeypox, says chief doctor
6 months ago
Karezza sex is nothing new - here's why it's going mainstream
6 months ago
Gogglebox sparks Ofcom complaints over X-rated scene between woman and a duck
9 months ago
A male birth control study has yielded some promising results
9 months ago
Sex after Covid? Becoming intimate post-pandemic
Next Page