Angela O'Connor has revealed her struggle in deciding to go public on her daughter's battle with illness.

The Kildare mother opened up earlier this week about how the HSE has refused to grant a medical card to her eight-year-old daughter Lucy, who is currently battling cancer at Crumlin Hospital.

In a blog post published today, Angela said that she was uncomfortable with releasing details of her family's circumstances but felt she had no choice after receiving the rejection from the health authority. 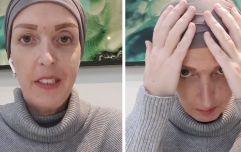 END_OF_DOCUMENT_TOKEN_TO_BE_REPLACED

"Anyone who knows me well, knows I am actually a very private person but in this situation, I felt I had no choice but to go public with Lucy’s story. I know it has been very difficult for family and friends to see Lucy’s photo everywhere and to hear me speak about such private details on the radio but I had to do it.

"I was raised in a household where you worked and paid tax, and I would think I am raising my own children with the same attitude. Sadly, the one time I have approached the State for support, it has been declined."

Angela added that the HSE has since released a statement “we don’t comment on individual cases... but they were over the means", slamming the organisation for commenting on her family's financial situation.

"They should not have released that information publicly. Of course we were over the means back then, we were both working! Discretionary medical cards are supposed to kick in for cases like Lucy.

"They also said we should have contacted them; we received no correspondence over the past five months other than a text to say they received the application, then the letter two days ago."

"Seeing photos all over the place is so hard so heart wrenching for me but I hope that someone will realise that children with serious illness should automatically get a medical card!"

popular
Princess Charlene in "very vulnerable" condition, says father
Charlie Bird says he "cries every day" as he struggles to cope with MND diagnosis
Real Housewives of Johannesburg star Naledi Willers dies aged 30
Boris Johnson announces birth of "healthy baby girl"
Concerns over travel restrictions this Christmas due to “significant numbers” of Omicron
Marty Morrissey to take a step back from RTÉ after tragic death of mum Peggy
Pippa O'Connor "forever grateful" as she goes to Billy's last check up in Holles Street
You may also like
1 hour ago
Kathleen Moore: Body of missing woman found near boyfriend's home in US
21 hours ago
Teenager hospitalised after petrol bomb goes off in Louth
2 days ago
Schools in counties with Red and Orange Weather Warnings ordered to close tomorrow
2 days ago
Officers who shared photos of murdered sisters on WhatsApp jailed
4 days ago
Gardaí launch appeal after teenage girl injured after being hit by van
4 days ago
Entertainment industry faces uncertainty over new capacity rules
Next Page