Man inhales false teeth during surgery, has them stuck in throat for eight days

He complained that he was unable to swallow.

A man who inhaled his false teeth while under aesthetic had the dentures stuck in his throat for eight days.

The anonymous patient, a 72-year-old retired electrician, had been in hospital to have a lump removed from his abdomen.

After six days, he discovered that his mouth was filling with blood and that he was finding it difficult to swallow.

Upon returning to the hospital, doctors discovered that he had inhaled his dentures during surgery.

According to BMJ Case Reports medical journal, the man returned to A&E complaining that he was unable to swallow any of his medication.

He had been prescribed mouthwash, steroids, and antibiotics to treat what doctors thought was a respiratory infection from having a tube down his throat.

They later found a semi-circular objected lodged just above his vocal chords - his false teeth which had been "lost during general surgery admission."

The metal plate with three front teeth had been causing internal blistering and swelling. 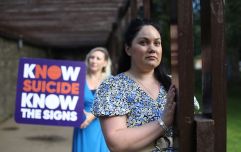 END_OF_DOCUMENT_TOKEN_TO_BE_REPLACED

Emergency surgery removed the dentures from the man's throat. He was discharged from hospital six days later.

The medical journal report states that this is not the first time dentures have been inhaled while a patient is under aesthetic.

"There are no set national guidelines on how dentures should be managed during anaesthesia," it read.

"But it is known that leaving dentures in during bag-mask ventilation allows for a better seal during induction, and therefore, many hospitals allow dentures to be removed immediately before intubation, as long as this is clearly documented."

The report concluded that all members of surgical teams must be aware of dentures before and after surgery, as well know what to do with them during the procedure.

popular
Selling Sunset's Chrishell Stause reveals "the brokerage has split"
4 new additions to Netflix to spend your weekend watching
The sentimental engagement ring trend you're going to see a lot of for the rest of this year
Kate Middleton has addressed the rumours that she's pregnant with her fourth child
Nicola Coughlan chats Derry Girls season three and upcoming Netflix show, Bridgerton
Here's what happens on every day of your menstrual cycle (roughly)
Someone has ranked the penis size of men from all over the world
You may also like
2 days ago
"Many will be upset..." Dublin to move to Level 3 from midnight, Taoiseach confirms
2 days ago
It'll take Ireland 55 years to bridge the gender pay gap
2 days ago
Netflix's Cheer star Jerry Harris arrested on child sex images charge
3 days ago
Covid-19: Dublin likely to move to Level 3 restrictions before this weekend
5 days ago
Living with Covid: Here's what levels 1-5 mean for social gatherings, wet pubs, and weddings
5 days ago
Further Covid restrictions announced for Dublin, government confirms
Next Page