Dear readers, please allow us to impart an importance piece of advice the Her team has learnt from years of drinking.

If you're on a night out, and someone offers you a jagerbomb, *don't* drink the energy drink.

For you see alcohol is a depressant, while an energy drink is a stimulant. Being drunk and really awake may seem like a good idea in practice, but in theory... you just end up being a bit of a mess.

How much damage could mixing energy drinks with alcohol do? Well according to Professor Richard van Rijn, possibly the same amount as cocaine.

Professor van Rijn has recently been testing the effects of high levels of caffeine mixed with alcohol on adolescent mice, and has claimed that, after time their brains and behaviour frequently resembles that of cocaine users.

Writing about his findings for Purdue University, van Rijn states, "It seems the two substances together push them over a limit that causes changes in their behaviour and changes the neurochemistry in their brains.

"We are clearly seeing effects of the combined drinks that we would not see if drinking one or the other."

Interestingly, van Rijn also suggests that the similarity in neurochemical signs see people who like an energy drink mixer with their alcohol, end up taking cocaine in later life. As he explains it, the change in in brain activity could see a user trade one vice for another in an effort to register a similar high. 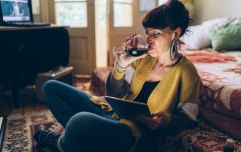 END_OF_DOCUMENT_TOKEN_TO_BE_REPLACED

"That is one reason why it is so difficult for drug users to quit because of these lasting changes in the brain."

"Mice that were exposed to highly caffeinated alcoholic drinks later found cocaine was not as pleasurable. They may then use more cocaine to get the same effect."

Professor van Rijn will most likely continue to explore his research, but in the meantime: drink your jager neat.

popular
Alex and Ani have released a Friends collection and could we BE any more excited?
“The cancer is gone!”: Daniel O’Donnell Reveals that Wife Majella is on the Road to Recovery
Get Out has officially dropped on Netflix and we know what we're watching tonight
Boyzone's Keith Duffy set to for the next I'm a Celeb Get Me Out of Here
Little Mix's Perrie Edwards tears base of spine in horrific injury
"80% of my body was covered:" LeAnn Rimes on life-long Psoriasis battle
22 discontinued chocolate bars that we REALLY want to bring back
You may also like
1 week ago
Guinness announces launch of Guinness 0.0, “the Guinness with everything, except alcohol”
1 month ago
Lockdown life: Hands up who's lately been drinking more alcohol
8 months ago
Drinking vodka and Red Bull on a night out can lead to 'risky behaviour', says study
9 months ago
Nutritionist says you can still enjoy alcohol and stay on top of fitness goals
9 months ago
This is why your hangovers get worse as you get older
10 months ago
The 10 best hangover cures have been voted on and we need to try them all
Next Page