The drug is said to be 600 times stronger than morphine.

Both the HSE and the Union of Students in Ireland have issued warnings about this drug following several deaths.

The opiate, known as Fentanyl is a narcotic commonly used as anaesthesia in medical procedures but non-pharmaceutical Fentanyls have been implicated in deaths where it was believed to be heroin. 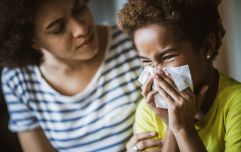 END_OF_DOCUMENT_TOKEN_TO_BE_REPLACED

There have been 5 deaths linked to the drug in Dublin and Cork in recent weeks. Deaths have occurred after users have injected or smoked the drug. An overdose results in respiratory depression which is reversible with naloxone.

According to USI,  Fentanyls are very potent and may even be absorbed through the skin, and that "even the smallest amount can cause overdose and fatalities".

The HSE said recently in a statement that Fentanyls are sold in powder form, probably mixed with heroin, or mixed with caffeine or Paracetamol  to mimic the effect of heroin.

“Therefore the drug can be snorted, injected or swallowed. Whatever way it is used, the drug is extremely dangerous and we are urging students and young people to stay away from this drug because it has been implicated in five deaths so far in Ireland.”

In June, the drug was attributed to Prince’s death. A medical report following the singer’s death stated the deceased “self-administered fentanyl.”

In its report, the Midwest Medical Examiner’s Office lists his cause of death as “fentanyl toxicity,” saying the overdose was accidental.

For support around drug and alcohol use the HSE Drugs & Alcohol Helpline, available Monday to Friday, 9.30am to 5.30pm. This confidential service has both a freephone Helpline (1800 459 459) and an email support service (helpline@hse.ie). Information is also available on drugs.ie in relation to this substance.

Girls With Goals || Her · Ep.151: 'A Story Shared' - Aoife P. Rafter on blogging during a pandemic and living with CF
popular
Here's what will happen in Bridgerton season 2 - if Netfix goes by the books
QUIZ: How well do you remember these minor characters from Friends?
When will lockdown end in Ireland?
"Women Shouldn't Have Rights" - See How The World Really Views Females In This Powerful New Ad Campaign
Netflix announces new true crime documentary series: The Vanishing At The Cecil Hotel
QUIZ: How well do you really remember the first episode of Grey's Anatomy?
Here's what happens on every day of your menstrual cycle (roughly)
You may also like
1 week ago
Ireland has now exceeded the peak of the first wave of Covid-19, says HSE chief
3 months ago
Plans considered by the HSE to let partners attend maternity appointments virtually
9 months ago
Patient in Covid-19 ward spat towards nurses on "four to six occasions"
9 months ago
HSE confirms no nurses in Ireland have died from Covid-19
9 months ago
Irish Distillers to make hand sanitising gel for the HSE
9 months ago
The HSE's My Options service is available now
Next Page