Yikes! Turns out there could be a LOT of bacteria on your yoga mat

Sorry to be the bearer of bad news once again, but it looks like your yoga mat is a bacteria magnet.

Elle USA has conducted some extensive research into the filth levels of your favourite piece of workout equipment, and well, it's not great news.

Dr Robert Lahita is a professor at Rutgers School of medicine, specialising in microbiology and he is also a yoga practitioner. 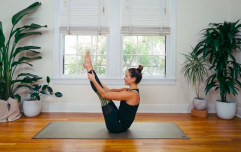 END_OF_DOCUMENT_TOKEN_TO_BE_REPLACED

He says: "The yoga mat is a very fertile source of infection, mainly because people sweat on them and they rarely are cleaned."

"Yoga mats are a fairly modern invention, which has helped revolutionize the practice, and, judging by the many women toting them across town, become a fairly chic fashion accessory along the way. But in the world of microbiology, a yoga mat is considered to be a "fomite".

A fomite is defined as 'an inanimate object used to spread an infection'.

The writers at Elle then went on to test yoga mats in gyms around New York and two weeks later they found Micrococcus luteus and Empedobacter brevis, which are both dangerous but only if you are immunosuppressed.

However, there are also risks of finding streptococcus bacteria, ringworm and athlete's foot lurking on your yoga mat, and their best advice is to clean your mat with bleach diluted in water, but not too much as a waterlogged mat becomes even more of a bacterial playground.

Girls With Goals || Her · Ep.160: The Beauty Of Coaching - Hayley Harrison joins us from Sport Ireland
popular
The countdown is on! 10 things we'll be racing to Penneys for when they open
Someone has ranked the penis size of men from all over the world
Here's what happens on every day of your menstrual cycle (roughly)
Why Are Men so Obsessed With Boobs? The Answer is Pretty Surprising...
James Franco Has Opened Up About His Relationship With Lana Del Rey
Love is dead... Shakira and her husband Gerard have reportedly split
More footage of Tristan Thompson cheating on Khloe has emerged
You may also like
1 year ago
Michael D. Higgins' yoga teacher is giving a online class with all proceeds going to Childline
1 year ago
Three simple yoga moves to try as part of your morning routine
1 year ago
#CuratedWithCassie: Can 'face yoga' really take years off you - and what the hell is sparkling tea?
1 year ago
3 simple yoga moves that will have a huge impact on your health
1 year ago
You can go on a drunk yoga retreat in Mexico, and SIGN us up
1 year ago
Can doing 'womb yoga' be the key to understanding your body? We ask an Irish teacher about the practice of Yoga Nidra
Next Page