It couldn't be easier.

First of all, calories are not everything, some people just eat healthy and never take them into consideration, but others use it to help them maintain a healthy diet.

Even if you pay no attention to calorie counting, there is one way to reduce fat, sodium, cholesterol and sugar as well as over 200 calories, and you're probably already doing it. 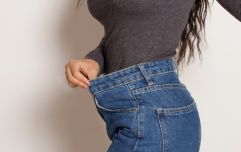 END_OF_DOCUMENT_TOKEN_TO_BE_REPLACED

New research suggests that drinking more water could stop you from eating as much when you're not hungry.

The study looked at eating and drinking habits of 18,311 people as part of a long-term survey. It found that the average person drinks 4.2 cups of water per day, but people who drank an extra three cups at less than those who drank the average amount of water.

It's obviously not big news that water is good for you, at this stage we've been told enough that it has countless benefits, but the study shows that it could be the answer avoid picking and binge eating food.

Other studies have long suggested that sometimes when you feel hungry you are actually just thirsty so drinking a glass of water may quench your thirst and satisfy you.

We're obviously not suggesting you replace food with water, but next time you're hungry only a few hours after a big dinner, check if you're actually just thirsty.

popular
Andrew McGinley says he is seeking a divorce from Deirdre Morley
Irish person dies after drowning in Spanish resort swimming pool
Love Island's Danica said she felt "disrespected" in the villa
Ekin-Su Cülcüloğlu could be joining the Loose Women panel
Search underway in Ireland for missing 11-year-old Ukrainian girl
Dami explains why he was "angry" during the Love Island reunion
PrettyLittleThing ad removed for portraying girl in "sexual manner"
You may also like
3 days ago
This is *THE viral watermelon salad everyone is obsessed with RN
1 week ago
Love Island's Jay says there's a secret and endless supply of snacks in the villa
1 week ago
McDonald's increases menu prices due to rising inflation
2 weeks ago
If you haven't added Nutella to your iced coffee yet, you are not living your best life
2 weeks ago
The only summer salad recipe you'll ever need – and it could not be easier
3 weeks ago
Boozy Aperol Spritz cake is the picnic food of dreams
Next Page