A doctor in Canada is being accused of using his own sperm in impregnate women. The accusations have been brought to light through a court case involving a couple who are claiming that he could be their daughter's biological father.

In 1989, Daniel and Davina Dixon sought help from Dr Norman Barwin to get pregnant with their daughter Rebecca. 26 years on, Rebecca and her parents have filed a lawsuit against Norman after they found out that Daniel wasn't Rebecca's biological father.

Rebecca first had suspicions about her parents when she read an article about the unlikely chance of two people with brown eyes having a child with blue eyes. She also noted that she never felt she looked like her father Daniel.

She told CBC News, "When I was younger, I was often asked if I was adopted. And we laughed about those situations. I don't physically look a lot like my parents, but I look a little bit like my mother's mom ... I was never really concerned that there was any problem."

According to The BBC, after taking a paternity test it revealed that Daniel was not her biological father and so they began to seek out the truth. After researching they found out that Dr Barwin had been sanctioned in 2013 for artificially inseminating three patients with the wrong sperm and subsequently resigned a year later. 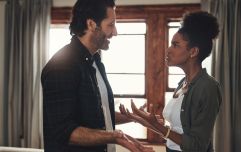 END_OF_DOCUMENT_TOKEN_TO_BE_REPLACED

A few months later Rebecca was contacted by a woman called Kathryn Palmer who had previously discovered in 2015 that Dr Barwin was her biological father. They did a DNA test which proved that the women were half sisters.

Dr Barwin's lawyer, Karen Hamway,  refused to comment on the new allegations, but said that they would be filing a legal statement of defence "in due course."

popular
Someone has ranked the penis size of men from all over the world
'They're Dead To Me Now' - Kate And Oliver Hudson Have Been Disowned By Their Father
The Queen has banned Meghan Markle from wearing any of Princess Diana's jewellery
Ryan Reynolds has shared the inspiration behind his daughter James' name
WATCH: Paul Mescal and Daisy Edgar Jones's first Normal People audition is stunning
Trolls target Emma Willis' eight-year-old son over pink clothes and long hair
If you constantly have a cold nose, this could be the reason why
You may also like
6 days ago
5 emotional stages of becoming a plant mom for the first time
1 week ago
A Japanese theme park is renting out remote working spaces on a ferris wheel
1 week ago
Jo Malone candle dupes and room diffusers - from Aldi, nonetheless
1 week ago
Dog locked in a crate rescued by the ISPCA over the weekend
1 week ago
Lines and Lessons: Irish sisters document one year in poetry and prints
2 weeks ago
Gay men have taken over the #ProudBoys hashtag on Twitter
Next Page