A New Marriage Equality Mural Has Been Installed In Galway

The artist Joe Caslin, who is responsible for the iconic marriage equality mural on George’s Street in Dublin, has installed a second mural in Galway, this time depicting two women embracing.

The Limerick artist told the Irish Times that “the images that I wanted to show are things that are dignified.”

He added: “To show love, that’s essentially what it is, the equality that people should have no matter what sort of a relationship they’re in.” 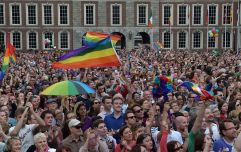 #MarRefMemories is trending and it will make your heart happy

END_OF_DOCUMENT_TOKEN_TO_BE_REPLACED

Caslin noted that he wanted to create an “insanely rural” female piece to contrast the “very urban” male piece.

“I didn’t want to have the piece of the two lads up and not follow it up with a female version,” he said. “I wanted to show the broader aspects of relationships.” 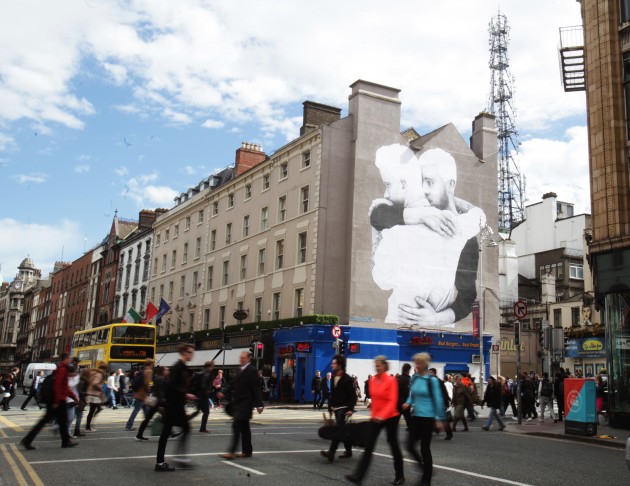 The mural on George's Street before it was damaged by rain.

The latest mural, which was installed on the ancient facade of Caher Castle in Co Galway, was inspired by Frederic William Burton’s painting The Meeting on the Turret Stairs.

The 50-foot image was installed, with permission from the owner, using a potato-based adhesive so as not to damage the integrity of the ancient building.

Like the mural on George’s Street, the biodegradable image will in time be eroded by rain and wind.

popular
Squid Game fans spot massive clue in Tug of War game
The First Quadrillionaire? Paypal Accidentally Gives Man $92 Quadrillion
Woman Hits Out After Being Called 'Ugliest Bride Ever' On Her Wedding Photographer's Facebook Page
Someone has ranked the penis size of men from all over the world
Here Are The Top 20 Most Common Pin Codes in The World
Tributes paid to Limerick based blogger and model Patrick McLoughney
Science says this is how many dates you have to go on before you find 'The One'
You may also like
5 years ago
Ten Stories From 2015 That Prove It Was A Great Year For Humanity
5 years ago
BeLongTo Report A 100% Increase In LGBT Young People Using Their Services
5 years ago
Same-Sex Marriage Is Officially Legal In Ireland From Today
5 years ago
It's Official - Marriage Equality Is Now The Law
5 years ago
Outrage As Gay Couple Apparently Asked To Leave Dublin Restaurant
5 years ago
'The Queen Of Ireland’ Has Broken Irish Box Office Records
Next Page