Apparently, making eye-contact with your cat makes them hate you

Of course it does.

They're a bit standoffish, they like doing their own thing, they're not the biggest fans of humans in general.

It's grand like, we've come to accept them for what they are. Evil. 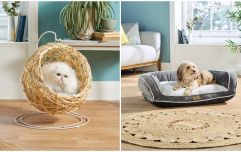 How paw-fect! Check out these eco-friendly pet buys that are coming to Aldi

END_OF_DOCUMENT_TOKEN_TO_BE_REPLACED

As it turns out though, there are plenty of reasons why a cat might come to hate their human - and one of those reasons is because the human made eye-contact with them.

According to Feline Forever, holding sustained eye contact - or just any eye contact at all - with your cat is a way to establish dominance... and cats, a lot of the time, do not like being dominated.

"If you often avert your gaze your cat may assume that she is the dominant party in the relationship! For this reason, many cats can find sustained direct eye contact to be aggressive.

"If you do not know a cat well, do not stare at her too much or you could make her nervous."

However, the website says if a cat already like you, they might meow and pester you to make you look at them because they want to be dominated.

Basically, it's all very complicated and you should just assume that all cats hate you at all times.

popular
You stars Victoria Pedretti and Dylan Arnold spark romance rumours
Forensic officers continue search for missing 4-year-old Cleo Smith
Someone has ranked the penis size of men from all over the world
Brian Laundrie parents 'to cremate body with no funeral' amid mystery over cause of death
Why Are Men so Obsessed With Boobs? The Answer is Pretty Surprising...
15 signs that prove someone is falling in love with you
The most popular baby names in Ireland have been released in Statistical Yearbook 2021
You may also like
1 month ago
New Colombian law gives workers two days off to mourn their pets
7 months ago
Missing cat returns home after 14 years away
1 year ago
Bad news klaxon! Kissing your pet on the mouth may be damaging your health
2 years ago
Aldi will be selling a cat radiator bed really soon and sorry, is there a human one on offer or?
2 years ago
Cat with phallic face marking is looking for her forever home
2 years ago
Cat ladies unite! Research shows that owning a cat is good for your health
Next Page