It's April Fools' Day, a day for people who enjoy pranks to go absolutely hog wild.

In this digital age, it is more often brands and companies that try their hand at being gas, and Google is one of them.

However, their foray into this world today did not pay off for the corporate giant who had to remove their prank attempt from Gmail after just a couple of hours.

END_OF_DOCUMENT_TOKEN_TO_BE_REPLACED

Engadget reported the company had to remove a fake 'feature' called Mic Drop which added a secondary send button that would then send a gif to all participants in the email thread, and then mute the thread so the sender couldn't view any of the replies.

Unfortunately, many people tried to use it without knowing what would happen and the Gmail Help Forum lit up with people giving out, including people who said they lost their jobs due to the feature. 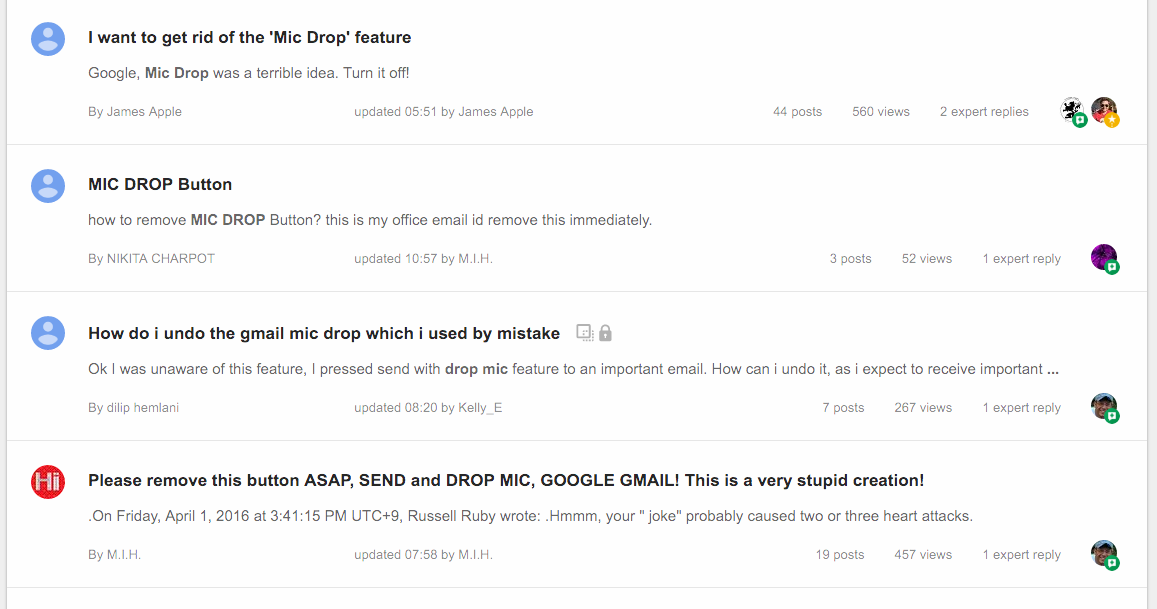 "Well, it looks like we pranked ourselves this year. Due to a bug, the Mic Drop feature inadvertently caused more headaches than laughs. We're truly sorry. The feature has been turned off. If you are still seeing it, please reload your Gmail page."

popular
Shirley Ballas books breast exam after Strictly viewers spot lump
You can now apply for tickets to the Late, Late Toy Show
Irish TikTokers are telling their dads they paid €50 for 'premium air' in their tyres
9 movies on Netflix that are perfect for a lazy Sunday afternoon
The First Quadrillionaire? Paypal Accidentally Gives Man $92 Quadrillion
Khloe Kardashian has JUST confirmed she is pregnant
Why Are Men so Obsessed With Boobs? The Answer is Pretty Surprising...
You may also like
2 years ago
Justin Bieber's April Fools Day prank seriously pissed off a lot of people
2 years ago
Penneys just pulled off the most hilarious April Fools' Day prank, and we're howling
3 years ago
PSA: You can now 'get your face on a Big Mac' at McDonald's
4 years ago
Penneys fooled us ALL with this paper bag folding trick
4 years ago
Have you noticed this weird new show on your Netflix feed today?
4 years ago
This is DEFINITELY a prank, but 'just the creme' Oreos are still causing a mighty fuss
Next Page