British Student Has Job Offer Revoked Because Of Her Hair

Lara Odoffin is a recent graduate of Bournemouth University, and like many young people has been trying to get her career off the ground for the last few months.

However, she was shocked to discover a job application had been revoked because of her hairstyle. Apparently her braided hair was not acceptable under the anonymous company’s uniform policy.

So after being accepted for a position within this company, they have TAKEN BACK the offer of a position on the grounds...

END_OF_DOCUMENT_TOKEN_TO_BE_REPLACED

Naturally the graduate was outraged, and posted about the incident on Facebook where it quickly gained traction and support:

"This policy needs to be eradicated completely, there is no room for such rules in this day and age- across any sector. More than anything it just made me upset. I had the right experience, they were happy to have me... it was just about my hair.

"Kind of silly really. I will be speaking to a lawyer about this tomorrow and will be contacting the company. As I have now learnt social media is a very powerful thing and I would not want to misuse it!"

Yeah @fashionpolice been bashing my fro for years, @intouchweekly compared it to a dog...and u know what I say? pic.twitter.com/OBvkpw4Vdn 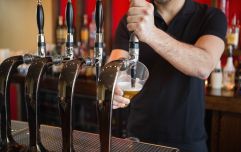 END_OF_DOCUMENT_TOKEN_TO_BE_REPLACED

Unfortunately, many black and bi-racial women are on the receiving end of discrimination regarding how the world views the ways in which they style their natural hair. According to Black Girl Long Hair there have been numerous instances of women being discriminated against because of their hairstyle.

We hope Lara gets a great job soon.

Girls With Goals || Her · Ep.161: Feeling Peachy - Sharon Keegan of Peachylean on being an absolute BOSS!
popular
Jennifer Lopez just shared a steamy snap of herself and Ben Affleck – and WOW
Emilia Clarke is set to be the next Marvel superhero
Bride dislocates her leg during her first dance in viral clip
The sad reason why viral gymnast, Katelyn Ohashi, isn't on the USA Olympic team
Spanish town offering free houses and jobs to entice people to move there
Here is why you should always take a picture of your oven before you go on holidays
Jennifer Lopez and Ben Affleck just became Instagram official
You may also like
1 hour ago
Rainbow tips are the cutest nail trend this summer – so bookmark these ideas for your next mani
2 weeks ago
The first snapshots from the new Sex and the City reboot is here – and it looks AMAZING
2 weeks ago
Anonymous TikTok account gone private after sparking Casa Amor rumours
2 weeks ago
Meet the 'Wolf Cut' – the hottest hair trend of summer 2021 – and you'll see why
2 months ago
Pesto eggs are going viral on TikTok – and when you try them, you'll see why
2 months ago
We got our hands on the viral Lidl hanging chair and life is good again
Next Page