Cancer Survivor Hits Back After Becoming Subject Of "Humiliating" Meme

Every day, a plethora of memes flood the internet, and it's all too easy to like or share without acknowledging that real people are behind these photos.

Cancer survivor Leon Mitchell has taken to Instagram after a photo of him was turned into a meme based on his resemblance to basketball player Steve Curry.

The meme, titled "Meth Steve Curry" poked fun at Leon's frail neck and shoulders, which are a direct result of his rare cancer called nasopharyngeal carcinoma, joking that the image was one of Steve Curry on methamphetamine. 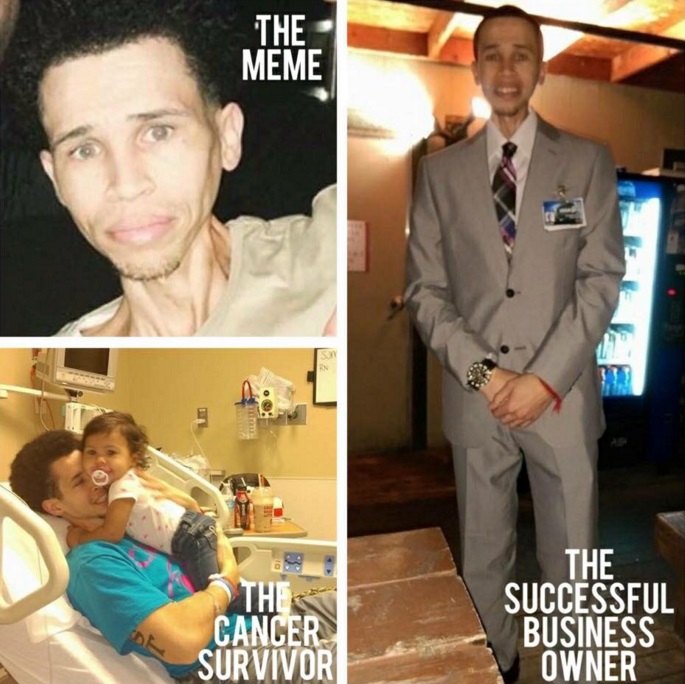 END_OF_DOCUMENT_TOKEN_TO_BE_REPLACED

He wrote: "I’ve struggled deeply for years with the devastating effects cancer treatment plagued my body with. The massive destruction it took on my neck, shoulders, nose, throat, and ability to function normally".

"I am more then a meme, I am a father, husband, survivor, mentor, community advocate, and Positive motivational speaker. Proud to have endured and conquered everything I have!"

END_OF_DOCUMENT_TOKEN_TO_BE_REPLACED

Mitchell described how he felt when he stumbled upon the meme to Buzzfeed.

He explained that he found it "embarrassing, humiliating and a bit hurtful."

"I’ve struggled for years and still do from time to time with my outward physical appearance. I was confused as to how it even made its way onto the internet honestly".

In a nice twist, Mitchell's Instagram post has gone viral, with many agreeing that it shares an important message.

popular
Molly-Mae Hague fans think they officially know her baby's name – and it means cloud
Baby found unattended in pram in Dublin, Gardaí reveal
Joanna Cooper heartbroken after her mum is diagnosed with dementia
Tasha Ghouri hits back at another islander who called her relationship fake
Blake Lively cast in film adaption of It Ends With Us
"I feel like I lost myself": Nathalie Lennon on her mental health struggles and her latest project with Pieta
Anne Hathaway shares disappointing news about The Princess Diaries 3
You may also like
4 months ago
"Home alone" – Prince Louis memes are taking over the internet
5 months ago
Andrew Tate has – finally – been banned from Facebook and Instagram
5 months ago
Sonya Lennon reveals ‘judgement’ her daughter, 17, experienced when buying pregnancy test
6 months ago
Here's how to make Hailey Bieber's TikTok famous Strawberry Glaze Skin Smoothie
7 months ago
Mass in Mayo church goes viral after spooky incident happens over livestream
7 months ago
People on TikTok are making 'healthy Coke' with just two ingredients
Next Page