Growing up with a dog makes you less likely to suffer from anxiety, study finds

They're called man's best friend for a reason.

Children who have a dog to cuddle up with at night, talk to and play with by day are less likely to suffer from anxiety, a new study published in journal Preventing Chronic Disease suggests.

Researchers from Bassett Medical Center in Cooperstown, New York, set out to find out if having a four-legged friend in the house could do more for your kids than just be a furry playmate. To do so, the researchers asked parents of children aged four to 10 who came in for well-child visits to answer a questionnaire about health related topics, among them pets in the home, before the checkup.

The researchers formed two study groups based on the answers, one with children who had a pet dog at home and the other with kids who did not have pups."We studied children with dogs because that was the most common pet and allowed us to collect a large sample of children," research scientist and study author, Dr. Anne Gadomski, explains to CBS News.

"What we actually found was children from homes with pet dogs had lower anxiety scores than children in homes with no pet dog," says Gadomski.

And while she acknowledges that further studies are needed to determine cause and effect, Gadomski, who is a dog owner herself, said she finds it very interesting looking at pets and childhood mental health from a preventive health angle. 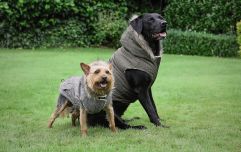 Aldi's pet event is back and yes, those are hooded parkas for dogs

END_OF_DOCUMENT_TOKEN_TO_BE_REPLACED

"Childhood anxiety is a huge mental health problem in the U.S. and anything we can do to mitigate anxiety or prevent its development would have a huge impact on the mental health system in the United States."

As to why having a dog is beneficial to children's health, Gadomski explains: "Interacting with a friendly dog also reduces cortisol levels, most likely through oxytocin release, which lessens physiologic responses to stress. These hormonal effects may underlie the observed emotional and behavioural benefits of animal-assisted therapy and pet dogs.”

Basically, having a pup is like having your very own best friend and therapist, all rolled up in one furry package.

popular
WATCH: Paul Mescal and Daisy Edgar Jones's first Normal People audition is stunning
The shows and movies you need to watch before they leave Netflix next month
Government vote to seal mother and baby home records for the next 30 years
Dublin TikTok house deny staging dance with couple having sex behind them
Trolls target Emma Willis' eight-year-old son over pink clothes and long hair
Here's what happens on every day of your menstrual cycle (roughly)
'I had to travel light': Adele jokes about weight loss in SNL appearance
You may also like
1 month ago
Lidl is stocking dog Halloween costumes next week and sorry now, how adorable?
1 month ago
Ashton Dog Pound in Dublin under investigation for animal welfare incident
2 months ago
10 stolen dogs recovered by Gardaí in Limerick
3 months ago
Gardaí issue warning about dogs attacking livestock
7 months ago
You and your doggo can now have matching robes and it's the news we needed
7 months ago
You and your dog can now have matching BFF necklaces and yes, this is the news we needed
Next Page