It was a sad day.

Earlier this year, many were delighted to find a Stormzy mural painted in Smithfield.

It was just days before the star arrived in Dublin and to say it was a masterpiece is an understatement.

However, it is no more.

Dublin City Council confirmed that because there was no planning permission or application for its retention, the mural could not remain.

Instead, there is now a 'Grey Wall'.

An ironic plaque on the wall now reads: “Grey Wall is standout piece in Dublin City Council’s continuing series on the transience and meaninglessness of art. 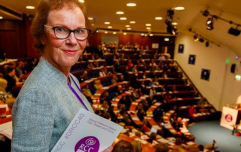 END_OF_DOCUMENT_TOKEN_TO_BE_REPLACED

“The drab, lifeless scene drains the colour from its surroundings, giving a stark warning about the threat of bureaucracy to imagination.”

It continues: "A powerful statement to Smithfield's growing creative community about the fragility of art."

An art collective group called Subset created the Stormzy mural and said they couldn't afford to apply for planning permission.

“We’re a startup. We have very little money and in order for us to apply for planning permission… it would have been very costly and time-consuming," they told The Journal.

Here's to another grey wall...


popular
The comfy €42 M&S boots we're going to be living in all spring
The €30 New Look skirt that will go with everything in your wardrobe
Better bundle up, Met Éireann are forecasting snow in parts of the country over the weekend
The floral Penneys dress that will instantly update your spring wardrobe
Meghan Markle and Prince Harry issue lengthy statement sharing new details about their exit from royal life
The €35 New Look dress that would be the perfect wedding guest outfit (and it comes in three colours)
We are absolutely loving this gorgeous €10 khaki mini dress from Penneys
You may also like
4 months ago
Vanessa Power's experimental Signs of Power art show debuts this Thursday
5 months ago
Subset to open new exhibition on climate change in Dublin
5 months ago
Screen printing studio Jando are holding a special event for Culture Night this year
5 months ago
You can pick up these retro food prints at an art fair mixed with a car boot sale
6 months ago
Calling all fans of The Den: You can Draw with Don at Dublin Zoo this weekend!
6 months ago
Meet Charlotte Posner, the incredible talent turning her art into beauty accessories
Next Page