Couples are breaking a pregnancy tradition but doctors don't advise it

It's becoming more and more common.

A new survey has shed some light on the changes in pregnancy announcements.

The new study, by ChannelMum.com, which surveyed 1,435 mums, has found that a large number of couples are telling people they are pregnant before the recommended time and before they have their first scan. 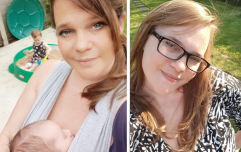 Woman wins over €350,000 after being fired from GP office for being pregnant

END_OF_DOCUMENT_TOKEN_TO_BE_REPLACED

Mums are breaking with the tradition of waiting until the three-month mark to announce their pregnancies, with just 26 percent holding out until after their scan to share the news.

Instead, one third chose to tell family and friends as soon as they discover they are expecting, with more than half announcing their pregnancy by the seven-week stage, despite medical experts advising that the risk of miscarriage still remains high.

And not only has there been a change in time scale, they are also changing the way they break the news.

Rather than waiting to meet someone in person, mums-to-be are sharing the news on social media with a lot of them sharing the picture of their first scan.

How long did you wait until you told people you were pregnant?

popular
The Daly Dish's Gina introduces newborn baby Gene to the world
Arthur Labinjo-Hughes' grandad says murderers “must never see the light of day again”
Man dies after being attacked by newly calved cow in Mayo
Status red weather warning issued for two counties
Officers who shared photos of murdered sisters on WhatsApp jailed
WATCH: The new star-studded trailer for the Harry Potter reunion show is here
Send chocolate to someone you love this Christmas and support a worthy cause at the same time
You may also like
1 week ago
Amanda Byram "bursting with happiness" after welcoming first child
1 week ago
Jessie J gets emotional on stage as she opens up about miscarriage
1 week ago
Jessie J shares heartbreaking news that she has lost her baby
2 weeks ago
Angela Scanlon is opting for a home birth after "scary experience"
3 weeks ago
Síle Seoige is "euphoric" as she announces birth of beautiful baby girl
1 month ago
Ellie Goulding speaks out about the sexism she faced returning to work after birth of son
Next Page